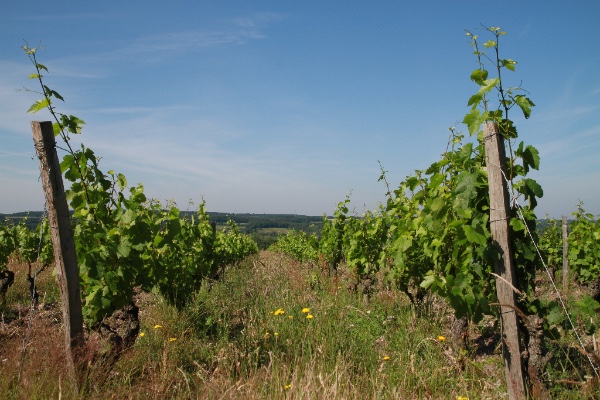 I was looking forward to seeing the vines, Spring having been relentless for the producers, and understandably, I was apprehensive to see the state of the vineyard and the low weight in grapes …  Marie Thibault welcomed us on June 15, as usual with a smile, despite the worries of repeatedly small harvests.

To add to her worries, she suffered a setback at the end of April 2017, when black frost fell on her vineyard Azay le Rideau. The 3.5 hectares of land is situated on one hill, South of the Loire, cultivated on flint clay. It is always precocious and thought to be barely affected by frost … 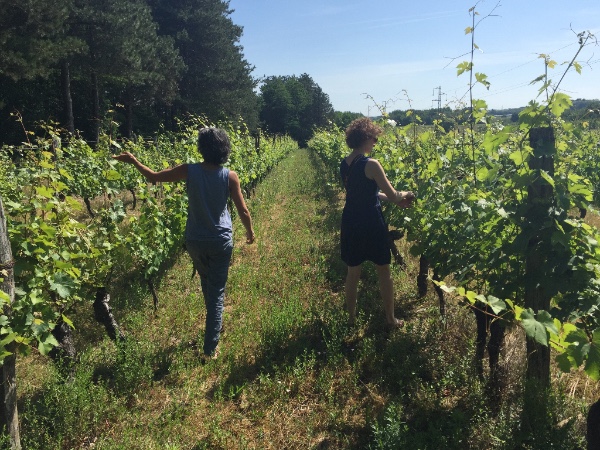 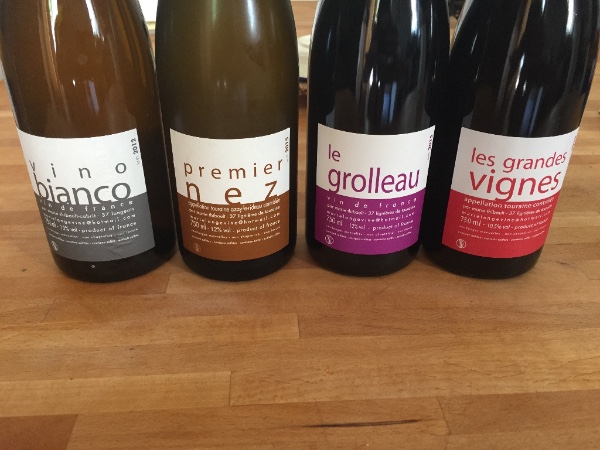 This year, however (like the year before), a black frost has ravaged the bottom of the hill, but leaving the top of the shelf was protected. Unlike white frost, these different conditions are what happens in the case of black frost, sneaking into the vineyards during the night, in a dry atmosphere without any humidity.

Technically speaking, cold temperatures (-4°C) in dry conditions results in a sublimation of the water naturally contained in the buds. This reaction being endothermic, actually lowers the temperature by a few additional degrees, thus creating the perfect conditions to freeze the buds.  This episode happened without mercy and was followed with cold temperatures the following week, and thus the buds were unable to recover.

According to Marie, since the vineyard’s installation in 2011, there has not been a perfect vintage, and even if these vines were saved from frost in the past, it is not the same today.  So how does one avoid these problems from happening year after year?  Marie plans to equip her vineyard with an anti-freeze system. It is a project only possible with the cooperation of her neighbours, as the investment in the structure for a plot as small as hers is too much. 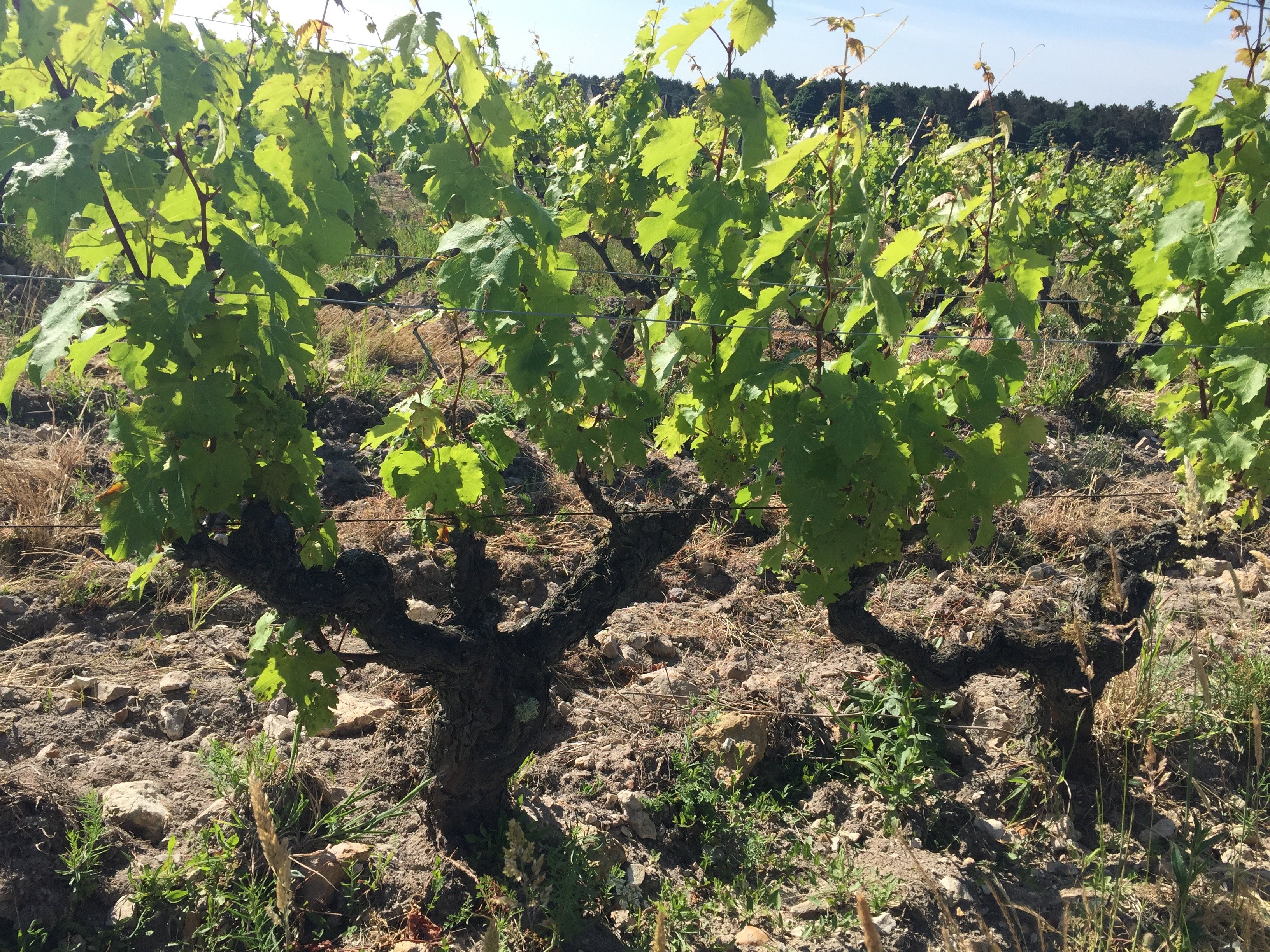 To fight against these late frosts, she will prune later in the season, and she will continue tending her vines throughout the summer. These vines being located on an early-ripening plot, the growing season begins at the start of March at the latest, so there is no other option to start vine-training later.

After the frost and then the cold spurt, the weather turned warmer and warmer. Today, the vines are growing very well and very quickly, in a heterogeneous way too because the frozen branches are subsequently later than the others. This means Marie is not left without a lot of work in the vines; raising and trimming in several passages, depending on the size of the branches.

At the time of our visit with her in the vineyards, she told us that the health status of the vines is very good, and she only needed to make two passages this year in mid-June, meaning no illnesses in the vines. However due to the grape buds early exposure to frost, there is a very small harvest expected, as Marie has identified a loss of 70%.

If the warm conditions continue, harvesting should take place very early for the region – around September 5th – because the vine has very few grapes and a lot of leaf area … the maturity in the few clusters per strain is very fast! 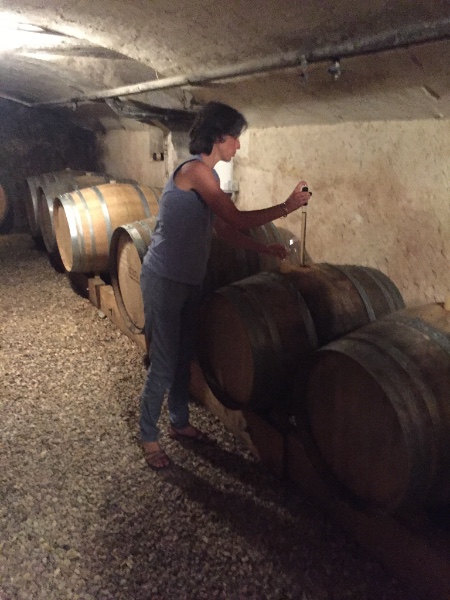 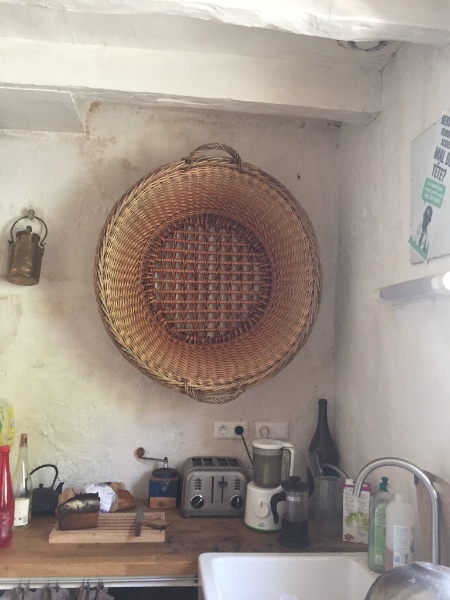 Returning to the tasting – How is the 2016 vintage looking?

At Domaine Marie Thibault, the rules are, there are NO RULES!  The following wines are not unlike any other wines…

The grapes were harvested, then whole-cluster fermentation took place over a period of only 10 days in a tank without any exposure to oxygen.  At the time of our tasting, fermentation had yet to finish completely, but first impressions of the wine is light-bodied wine lean towards fruity characteristics; just ripened red cherries, crushed strawberries, and a slight scent of pavement on a hot summer’s day.  Still a whiff of reduction, due to the continuation of fermentation.

Surprise : the wine is still under its cap of grape skins!!!  Marie wanted to test long skin maceration with red grapes; she chose to do so with the Gamay 2016.  The grapes were destemmed by hand in the same old wicker basked typical of the region (see photo of basket hanging by sink).  The total volume of production is 20HL.  Happily – her efforts have paid off!  The wine is finished fermentation, and is ready to drink now!  Lifting the lid of the tank alone to view the cap perfumed the winery with fine yet intense floral aromas.  This was reflected in the glass as well, with a juicy structured mouth expressing notes of purple flowers, fresh red fruits and wild strawberries.  A real success!

There were two different vinifications two different plots of grapes because the 2016 frost had caused a significant loss of the harvest.  Marie was fortunate to find Chenin grapes from neighboring producers also grown in organic and biodynamic crops.

Since the grape harvests of 2016 were small, Marie had could afford to wait long before harvest, picking all the grapes at one pass.  All the grapes were therefore very ripe and some over-mature with presence of the noble botrytis of very good quality (very rare on its soil).

This parcel produced wines with a more tense, salty flavor profile. The 2016 vintage was hot, therefore the wines require a little more ageing so that all the components come together harmoniously. 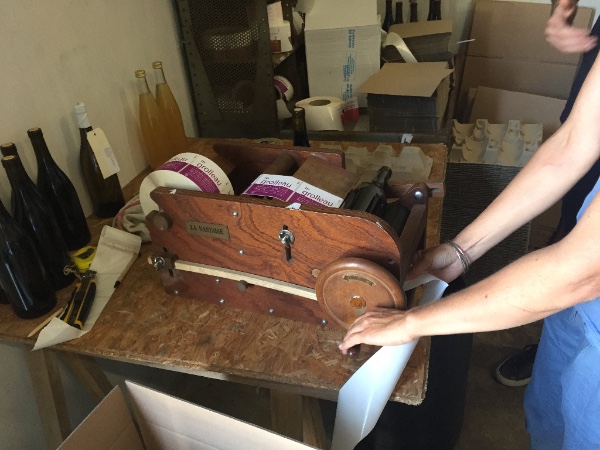 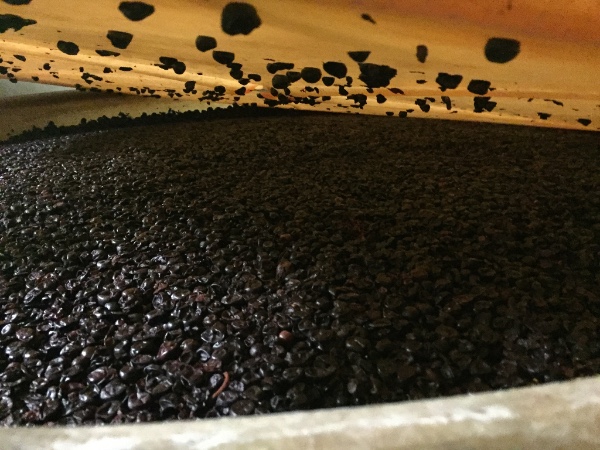 What is available now?

Juicy, supple, very fruity without being too simple either because it presents a nice chewy texture and smoky red plums and black berry notes with just the right touch of funk.  This is an excellent food-wine, perfect to pair with pork dishes in all forms.  From the first glass of the bottle to the last glass, the evolution of the wine is incredible, and no glass is the same. 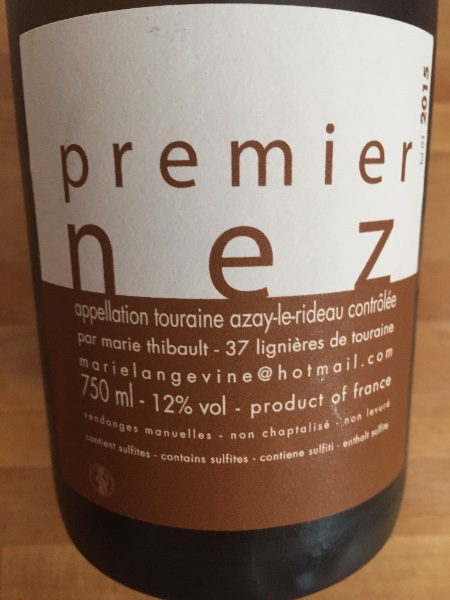 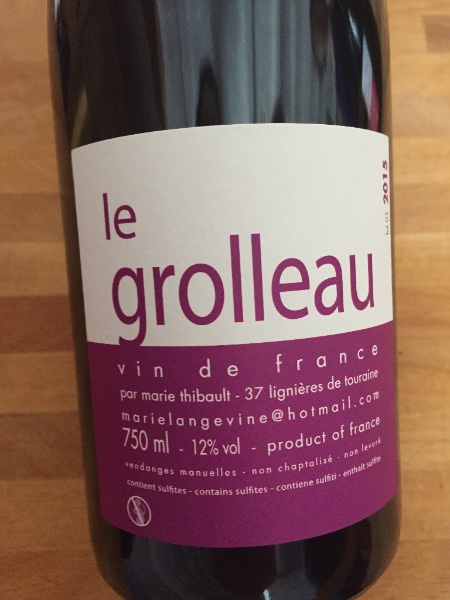 The wine has emerged from its difficult period, and was showing very open. The complicated vintage has a low alcohol level (10.5%) that you don’t feel, since the wine is quite balanced.  Silky tannins, anise, red plums, red fruits and a boquet that infects the room with the most delicate blend of lavender, tobacco leaf, and violets.

Unlike many Sauvignon Blancs from the Loire, or Sauvignon Blancs in general; this special wine is left on the skins for 11 months.  This produces a definite orange wine in every sense; very exotic, pithy orange peel, pomello, ripe yellow peaches, dried flowers, fennel, dried pinapple, fenugreek, the wine had remained on the skins until August 15, 2013. 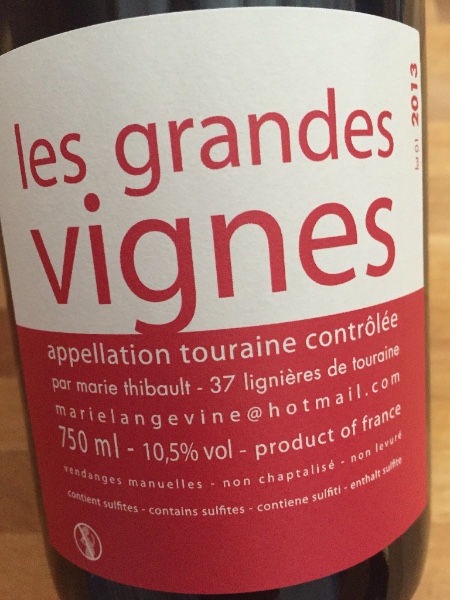 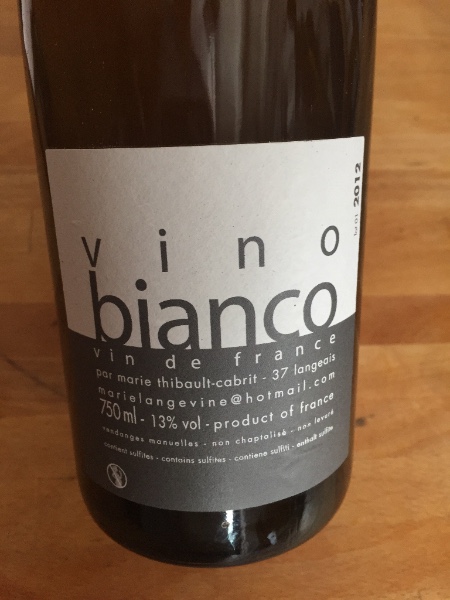 Some Good News ! Marie has taken over 0.5 ha in Chenin blanc and Côt on a separate and more protected plot, surrounded by woods. Fingers crossed for less frosts … we hope!

She has also taken over 2 ha with intentions to plant more Chenin Blanc. This is a a project in the somewhat distant future, but we should have more wines in production in the years to come. The plot was previously planted with wheat and other cereals to feed the soil (see photo below). When plantings commence, they will be regularly carried out at a rate of 0.5 ha per year. 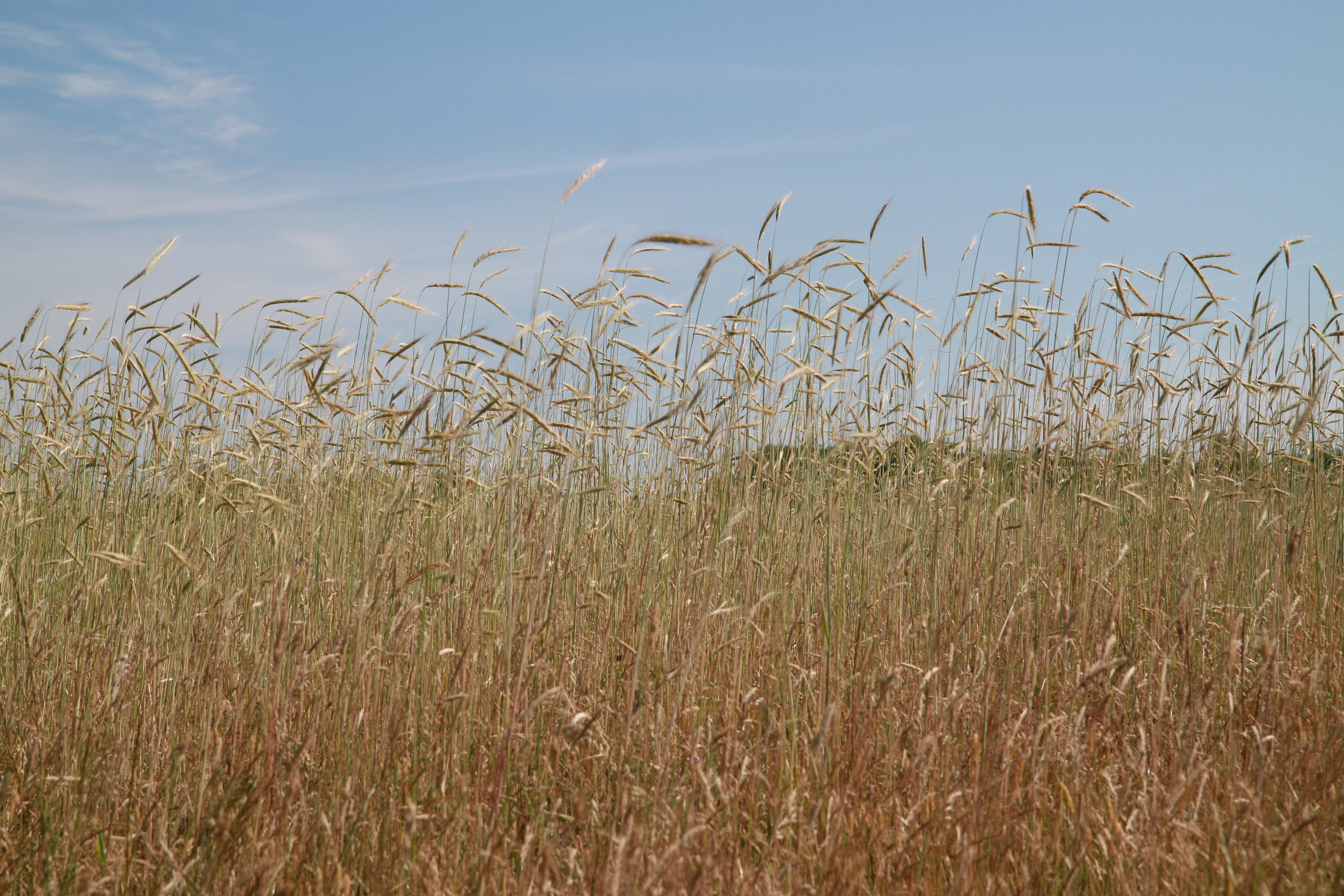 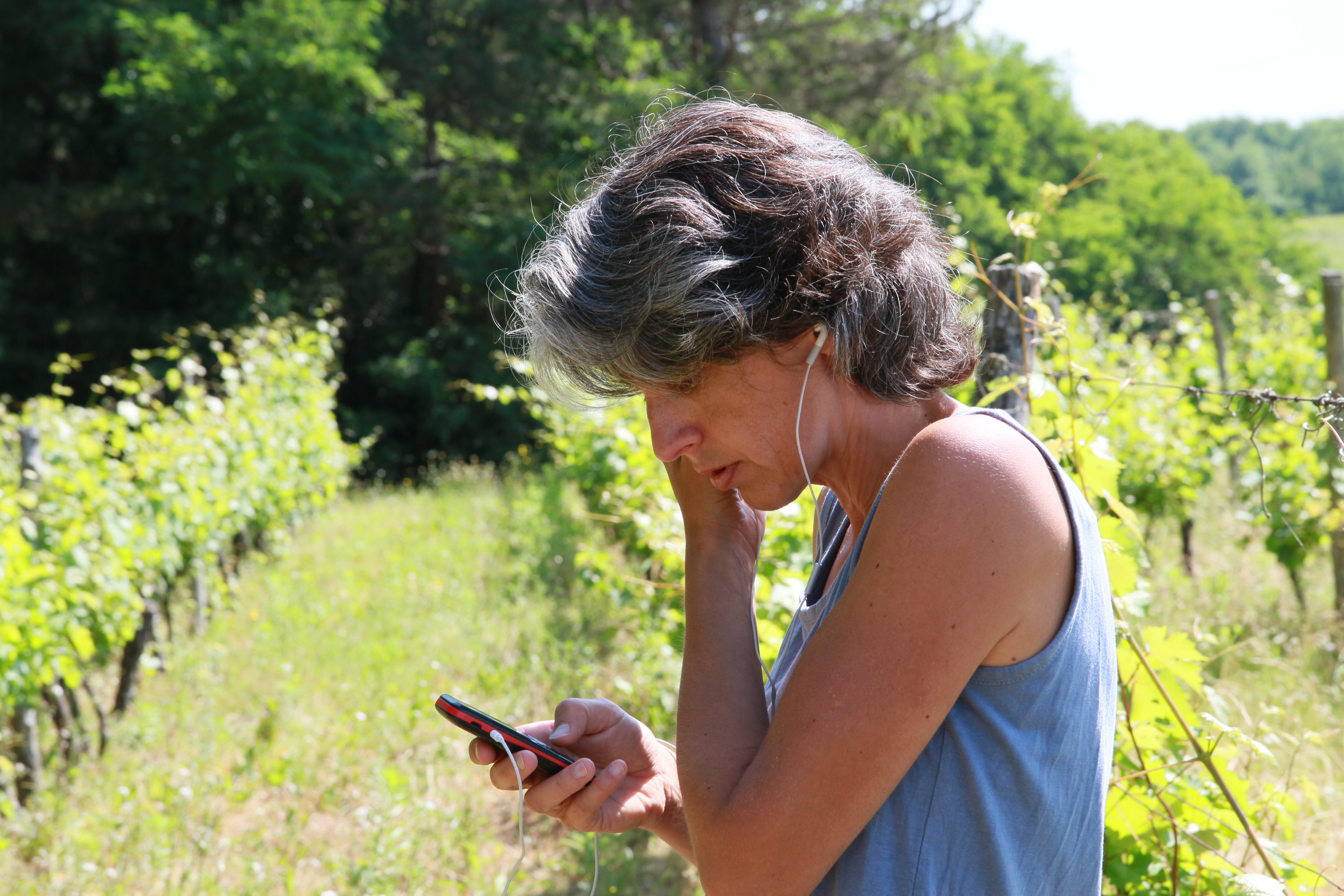