I am greeted at Hyeres train station by Magali Combard, the namesake of the eponymous rosé from her family’s winery, Domaine Figuière.  We are in the heart of the Côtes de Provence, just halfway between Marseille and Nice, right at the entrance to the French Riviera.  Luxurious Côte d’Azur destinations – St Tropez, Cannes – are just over an hour away.

As we drive along the gorgeous coastal road to La Londe, Magali explains the explosion of the Cotes de Provence rosé market was just arriving when she joined the family Domaine nearly 15 years ago.

Upon arriving to the beautiful tasting room, it is immediately evident just how important rosé is.  The cellar door is a tribute to the Domaine’s flagship rosé wines – large formats from Magnum, to Jeroboam, to Mathusalem are displayed in their signature shades of pink like an art gallery exhibition.

For rosé worshippers – this is the Holy Grail!

A Burgundian philosophy of terroir…

The family’s viticultural story begins in Burgundy, specifically Chablis.  After 10 years partnership with Michel Laroche in Chablis, Alain Combard who was in charge of winemaking in domaine Laroche, was ready to return to home.  He parted ways with his business partner in Chablis, sold his shares, and moved back down South in his native region – Provence.

With an appreciation for terroir-driven wines, he searched his native Côtes de Provence for a parcel with the best terroir. Much to his fortune, he found it – Saint André de Figuière – a prime 18HA property located in the Var region, that had been organically farmed since 1978.  In 1992 he purchased it, with in mind the idea to produce high quality wines from these Schist soils which remind him of Chablis soil.
The Domaine Figuière has continued to be farmed organically to this day! 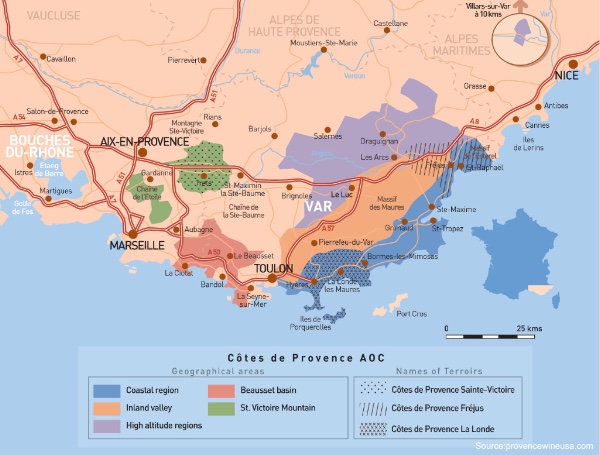 What makes these wines so elegant?

Terroir, Terroir, Terroir.  The sea is half a kilometre (as the crow flys) from the Domaine, and thus the vines benefit greatly from the ventilation of the cooling breezes (and the Mistral), the gentle slopes of the hills on which they are planted, and the nearly 3000 hours of yearly sunshine.

The soil is exquisite.  Of the four Crus of Provence, La Londe is blessed with a variety of silver and grey schist soils pierced with veins of pink and white quartz.  When breaking pieces of exposed schist, your fingers are glittering in the bright Provencal sunshine.  The vertical alignment of the schist and quartz, much like books on a library shelf, allows the roots to easily maneuver deep into the soil.

It is important to note the difference between the generic “Cotes de Provence” appellation that spans a production area of 150km, vs the Cru status of “Cotes de Provence – La Londe” (154ha planted of 411ha available).  This specific area in which Domaine Figuière is located achieved Cotes de Provence terroir designation in 2008, and is one of four in the region to have it. 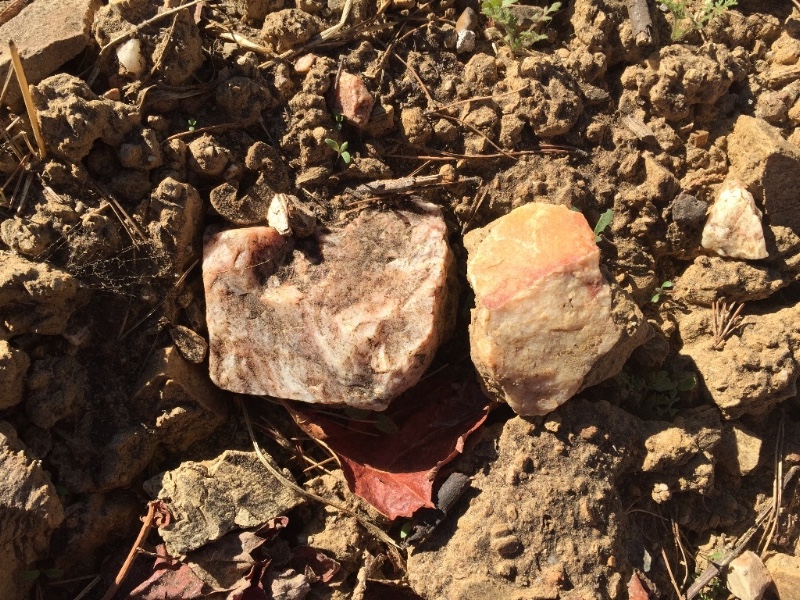 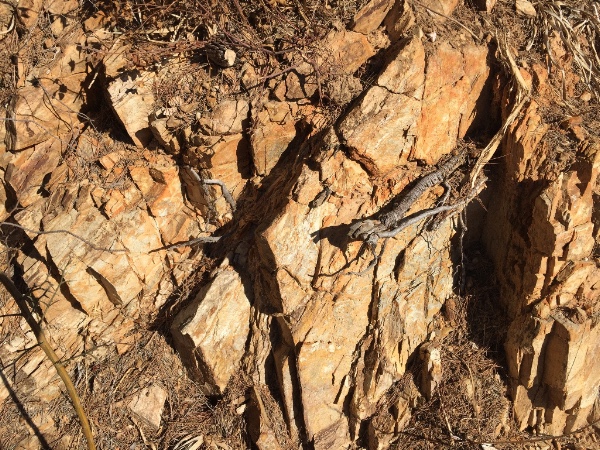 To mention Francois is incredibly passionate about soil health is an understatement.  Never have I been to a Domain where the vigneron isn’t rushing to show me their vines, but instead their “crèche de vers de la terre” – an earthworm nursery.  These little guys are nurtured with compost from nearby ponds, and are then littered throughout the vineyard to nourish and aerate the nutrient-poor soil.

At this time, the harvest has just finished, but the Domaine is preparing mulches to revitalize the soil.  Crop covers are taken very seriously here.  Every other row is planted with rye and leguminous plants. Both with play an important role.

As for rye, we are interested in the roots shape “taproot” which help “decompacting” the soil and making sure oxygen will go in. Especially true for sandy or schistose soils.

Leguminous plants will nutrish the soil thanks to a specific symbiose in between their roots and a fungus called mycorhyze. This symbiose will be able to transforme the atmospheric nitrogen into a nitrogen available for other vegetals and thus for vines. 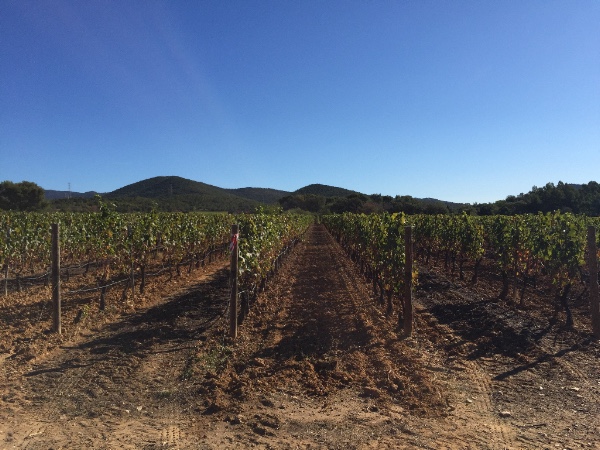 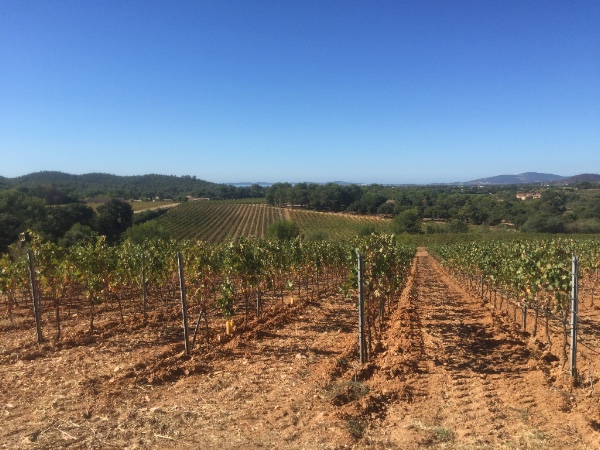 An incredible amount of work goes into soil maintenance.  Aside from these little earth-worm nurseries and crop cover projects, humidity and temperature readings are performed on a high-tech level.  Digital sensors penetrate specific vineyard sites to monitor water levels, which are accessible via a computer system.  This is important because while irrigation has been permitted since the drought of 2003, it is a very formal process controlled the local governing body.  Vineyards owners must make a formal request to irrigate en mass, and they are only permitted to irrigate at a very slow drip rate.

It’s not only the vines that are thirsty in Provence!  Electric fences initially installed to fend off the local sanglier (wild pig) population are being replaced with higher fences to keep the hungry and thirsty pigs away.  These little guys are intelligent creatures and will do anything to feed their families the juicy berries, including the thick-skinned mama pig lying down on the electric fence to allow her little babies to pass. 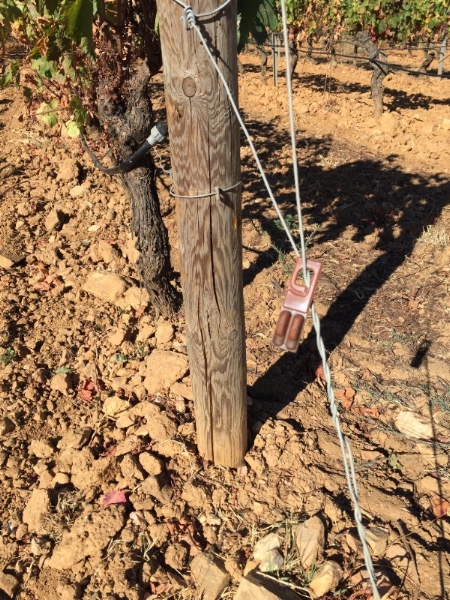 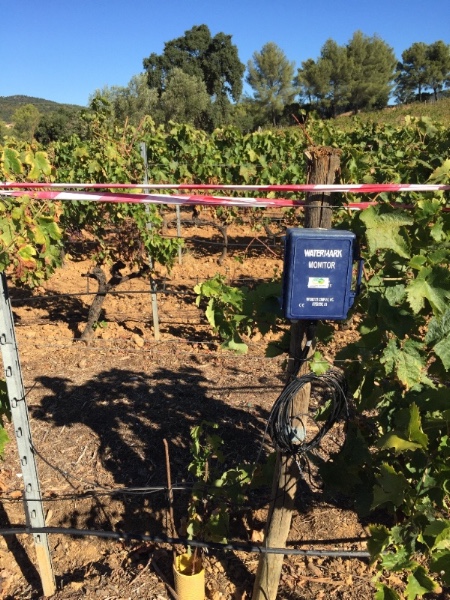 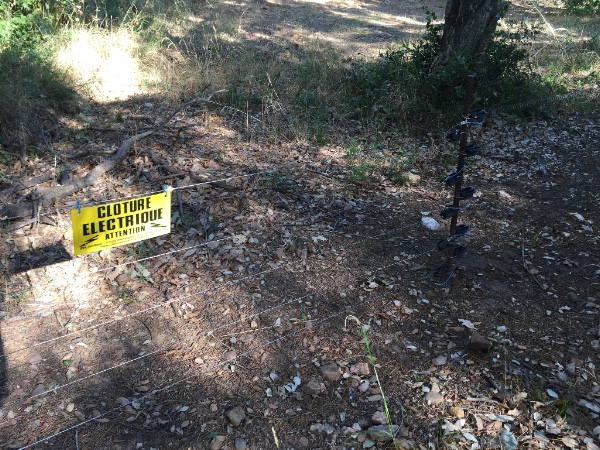 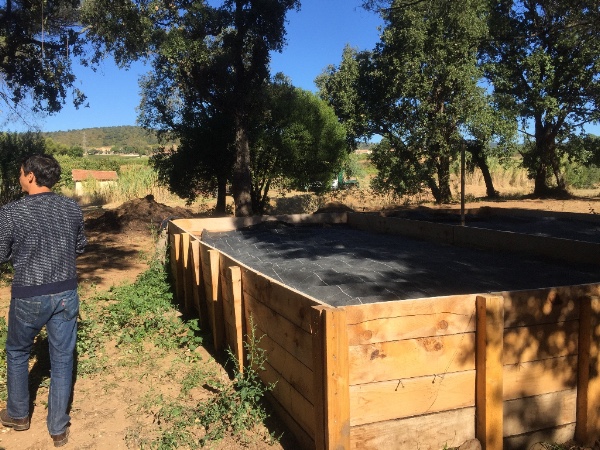 Rosé is on fire!… literally…

While it’s easy to be distracted by the stunning blue see waters, panoramic postcard-views, and gorgeous sunshine, looking upto the neighbouring Maures mountain range, it is like being transported to another planet.  The devestation of July and September’s catastrophic forest fires are on full display, and perhaps even more shocking in contrast to the bright green vineyards, just recently harvested.

Francois leads the tour through the area, and mentions how severe the real threat of forest fires are to the livelihoods of local vignerons.  In the distance, one can see pristine white facades of tneighbouring Domaines, yet utter devastation surrounding the property where teams of firefighters held off the fire to protect the buildings.

Fortunately, the fires stopped at the vines.  Another benefit of irrigation : healthy damp terroir prevented the fires from entering the vineyards, and at most, only a few exterior rows were touched.  Domaine Figuière knows how lucky they were to not have the fires touch their properties, yet some vignerons have resorted to washing their grapes in an effort to rid them from the ash and undesirable flavours that could potentially be present. 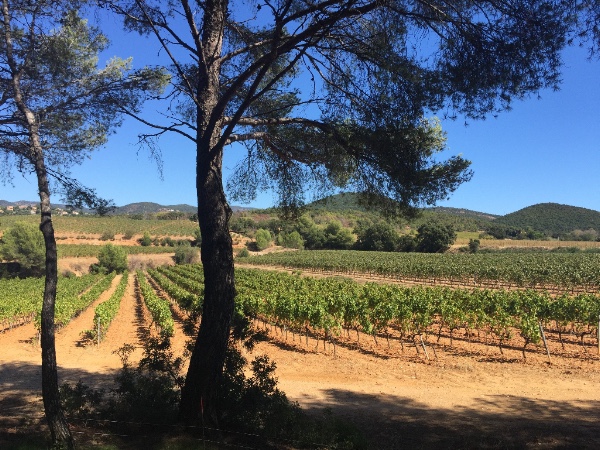 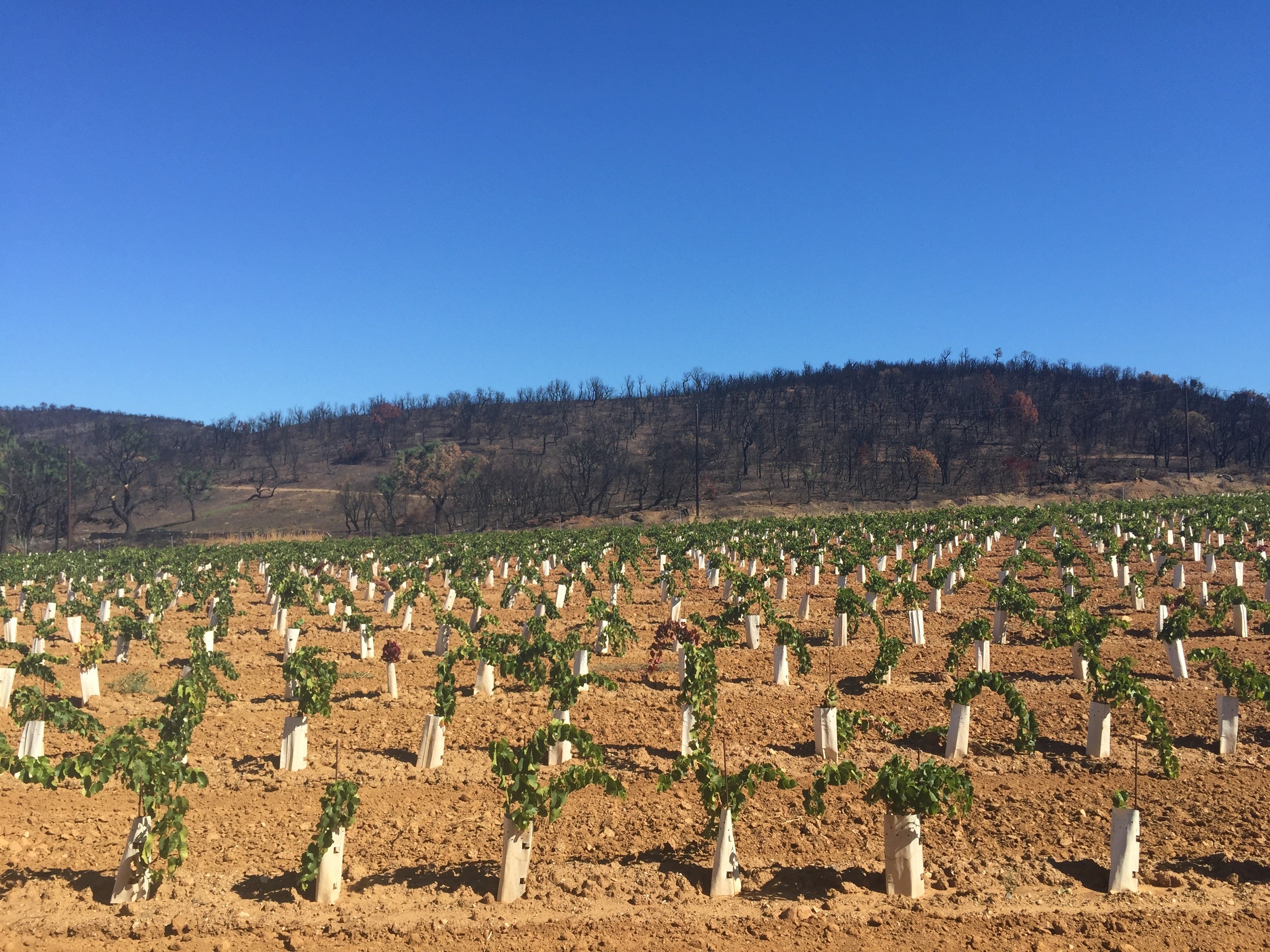 Springtime came in hot and quick, with bud burst happening very quickly.  The frost that touched nearly every wine region in France thankfully skipped past Domaine Figuière, however Francois was quick to mention that just 30km north of the Domain, a fellow winegrower lost 85% of his crop due to the frost.

The temperatures in the months following bud burst were unusually inconsistent, meaning that flowers were malformed in June.  For this reason, the harvest is less than expected during a normal harvest.

Vintage finished about two weeks ago, with harvesting by machine happening throughout the evening and hand-harvesting starting early in the morning and finishing by lunchtime.

The afternoons and evenings were reserved strictly for pressing and vinification, with fermentation stalled thanks to a large refrigeration truck in which the containers of harvested grapes were placed until the team was ready. 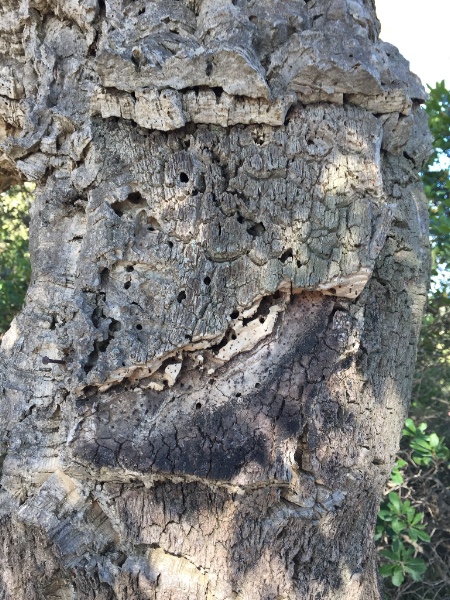 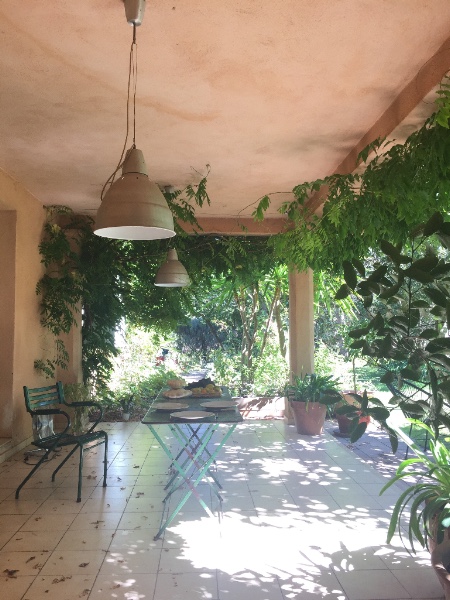 Confidentielle – AOC Côtes de Provence La Londe
Confidentielle has two meanings in French – a “secret” (like confidential in English), but also “exclusive”.  This range of wines is the highest quality of the production.  Wines made from select parcels of vines planted on specific schist and quartz soils. Made with local grapes from the estate vineyard in organic culture.  Interesting fact – the DIAM cork is from their regional series, and is only made of French cork from Provence!

Red – Syrah & Mourvèdre
The wine is aged in French oak barrels, but they only render the final product more elegant.  Garrigue, rosemary, savoury garlic, spiced meats – this wine is powerful but refined.

White – 100% Rolle (Vermentino)
The delicate scents of white flowers, licorice, anise and fennel are fresh and layered.  The wine is well-structured thanks to the used oak barrels influence.  Notes of lime burst through the wine, but the texture is undeniably crunchy apples, tart lemons, bay leaves and eucalyptus.

Première – AOC Côtes de Provence
Wines made with estate vines only. Organic wines carrying all the history of Figuière, the oldest blends of the Domaine.

Red – Mouvèdre & Syrah
In contrast to the elegant and voluptuous Confidentielle red, this one Francois playfully refers to as the “mauvais garçon” aka “the bad boy” wine. Aged in 300L barrels, this wine is full of jagged edges; olives, garrigue, cured sausage, sweaty and mouthwatering.  It is savage, but pleasantly charming.

White – 70% Rolle (Vermentino), 30% Semillon
The wine is literally bursting with lime zest, lime juice and lime pith with a searing minerality from the schist soil.

Rosé – Mouvedre, Cinsault, Grenache
Bursting with ruby grapefruit, the pithy rosé has delicious spikes of acidity, but well balanced with creamy tannins.  One can almost feel the hairs of raspberries pleasantly zinging the tastebuds.  White pepper, apricots, hay, and white peaches comprise the flavours of this wine. 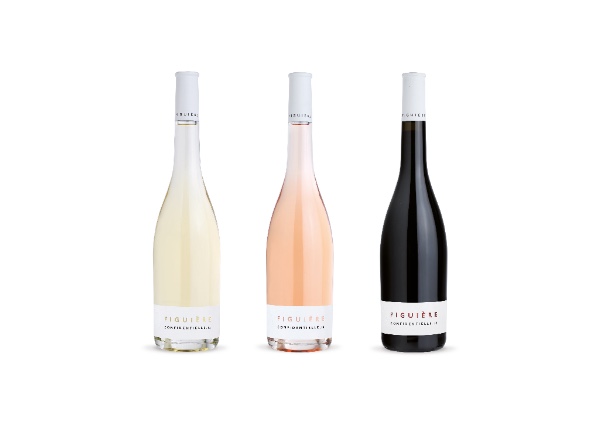 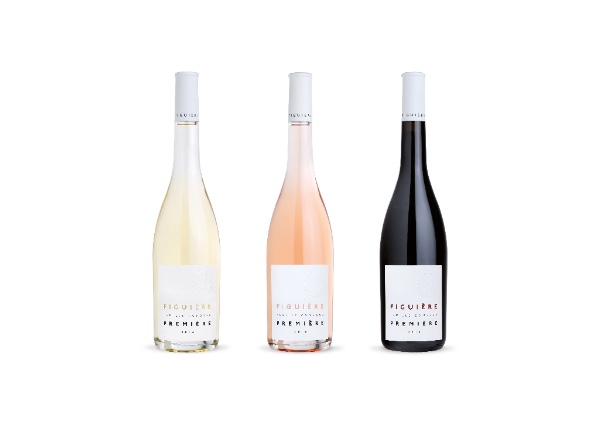 Signature – APO Côtes de Provence
Wines made with neighbourhood vineyards from longstanding contracts, carefully selected. Grapes are bought on the vines, and manual harvests are performed by Figuière’s team.  Interesting fact – Prior to Alain Combard’s arrival at Figuiere, surplus grapes in Provence were always sold to co-ops.  Alain had many contacts from Chablis that wanted his wines, and he made the “Burgundian” innovation in Provence to create his own “negoce” label to complement his Estate range at Figuiere.

White – 100% Rolle (Vermentino)
Clean, fresh and crisp; dried grass and hay, with a touch of saltiness.  Aperitif with oysters, raw shellfish.  This is an excellent competitor to wines from the grape’s cousins in Sardenia.

Rosé – Cabernet, Syrah, Cinsault, Grenache
Citrus, strawberries, raspberries and a nice zing of acidity are hallmarks of this wine.  Easily enjoyed as an aperitif. 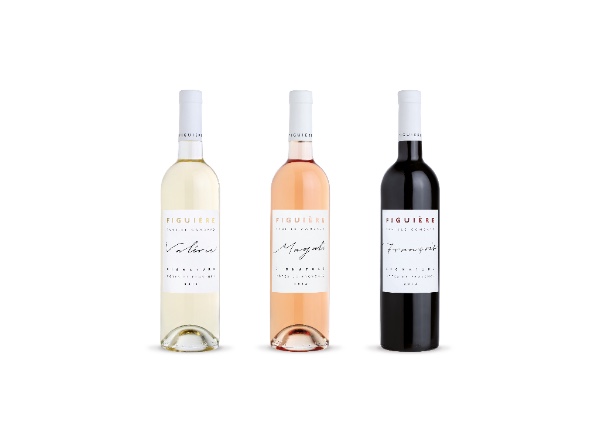 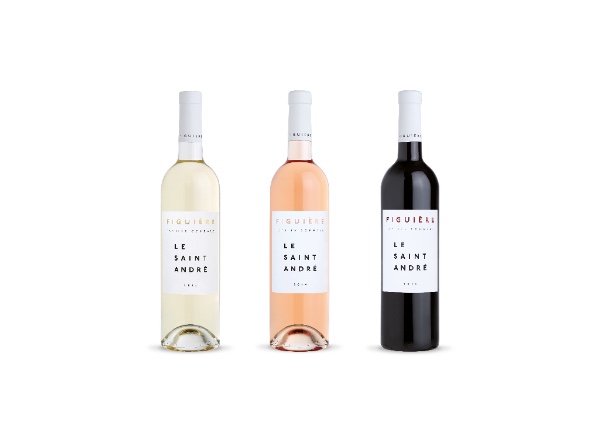 What’s in a Name?

Historic customers of Figuière will have noticed a large rebrand that the winery has conducted over 2016-2017 period.  The look is modern, clean and fresh, with the winery entirely dropping “Saint Andre” in preference for just the name “Figuière”.

Why Figuière?  This is a world that translates from old Provencal dialect to mean “fig tree”.  After walking the property with the abundant fig trees full of their sweet fruits, it is evident this name is perfect for the Domaine.

Figuière fans might have also noticed the addition of the new bottle for estate brands of Confidentielle and Première.  Patented by the winery, the Domaine commissioned Italian designer Luca Trazzi to create an elegant and sophisticated bottle that was a harmony of their family’s Burgundian origins, with Provencal style.  The bottle had a long sleek neck like the fashion of Provence bottles, but rounds out the base in an undeniably Burgundian wine-bottle style.