Marie Thibault: Tour of the vines

Since we were last at Marie’s new cave in Summer 2018, she had just moved in a few months earlier with her partner, Montlouis-sur-Loire winemaker Frantz Saumon. The space was raw with beautiful potential that these two have since realised very quickly.

Doors have been installed on the Cellars, new concrete foundations were poured to create a functional harvest reception area, the labelling room is currently under construction, and the development of a wine cellar to stock their inventory are just a few of the new additions they have made to the Domaine.

Of course we can’t forget the hard work in she has done in the vines!  Marie spent her Spring fighting episodes of frost, planting 0,5HA of Chenin, and then surviving the two heatwaves that passed through in late June and then again late July.

Despite this, Marie remains ever-resilient and joked that now vintage is much-less stressful in comparison to the months of April & May!  She predicts harvest 2019 to officially start mid-September. 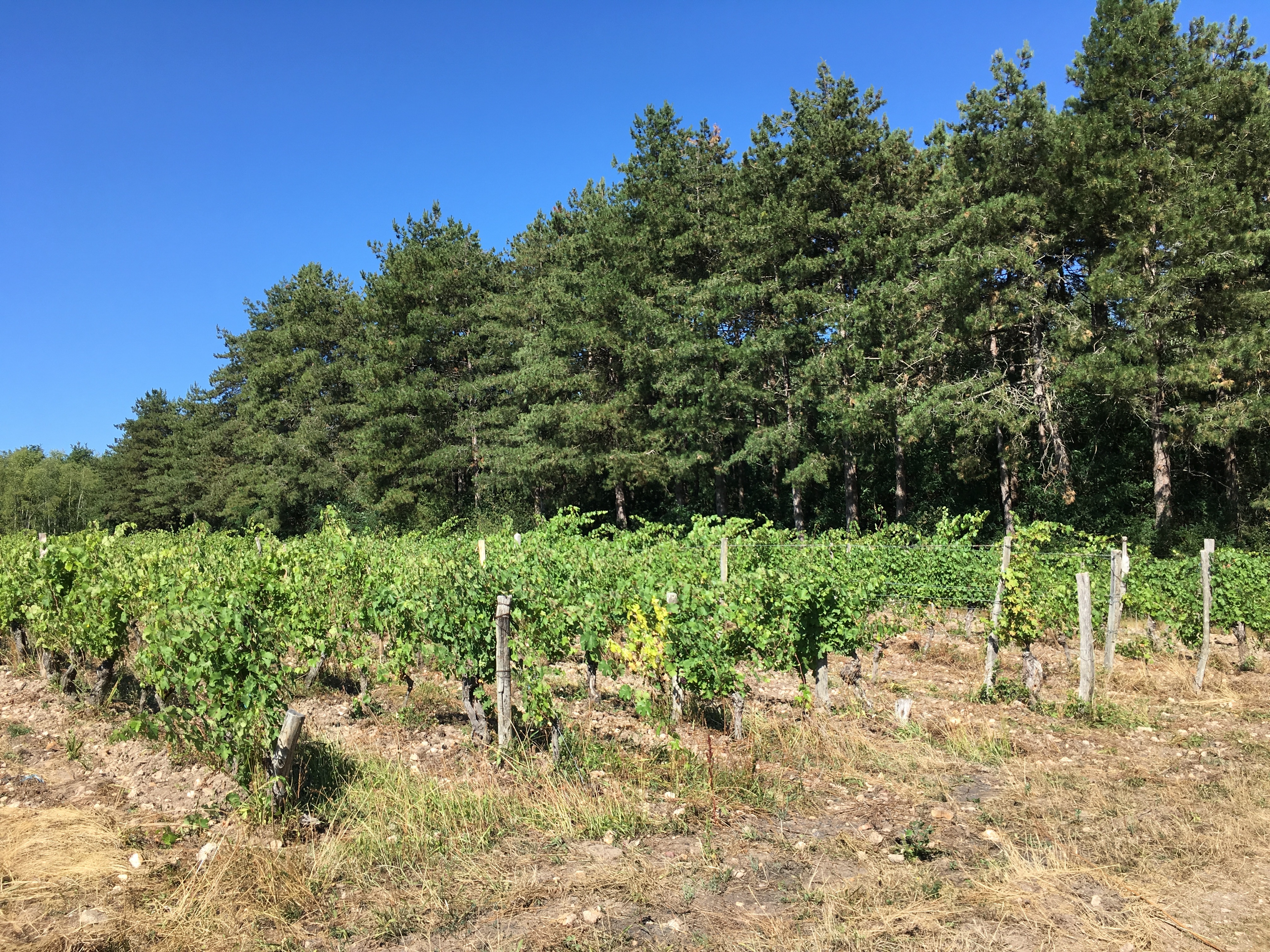 Photo 1 : The forest effect – rows next to forest didn’t have frost damage
Photo 2 : Pine forest below vines cut down by neighbours = potential for frost in 2020
Vintage 2019 : The Cost of Frost

Extreme climate changes have become the new normal here.  Marie explained that these two particular frost periods – first one April 4th, second one May 6th – happened over the weekend between 3am-5am.  She put candles in the vines to increase temperature, and burned hay bales to create a smoke cloud and shield the vines from the sun’s piercing rays when the sun rises.

4 April – First Frost.  -4°C, lots of humidity, 10% lost, but because Marie has begun to prune very late (in March) to push the vines to bloom later, the buds still hadn’t come out.

6 May – Second Frost. -4°C, 30-50% damage on parcels without candles were lost (Gamay & Grolleau).  Marie had to make a choice, and she chose to protect the Chenin which was at a greater risk of exposure.

For a small winemaker like Marie, it is impossible to protect all the vines.  To be effective, you need 300 candles per HA.  At 10€ per candle, with only 2 hours of autonomy each, you must choose the right time to light them.  It takes time and labour to place them in the vineyard, to light them, and then to remove them as soil work cannot be done in the vines with candles in the rows.  This year Marie lit the candles 5 different nights!  The math is easy.

The project for 2021 is the serious investment (45 000€) for a Fan installation that potentially could protect upto 5HA of vines from frost. 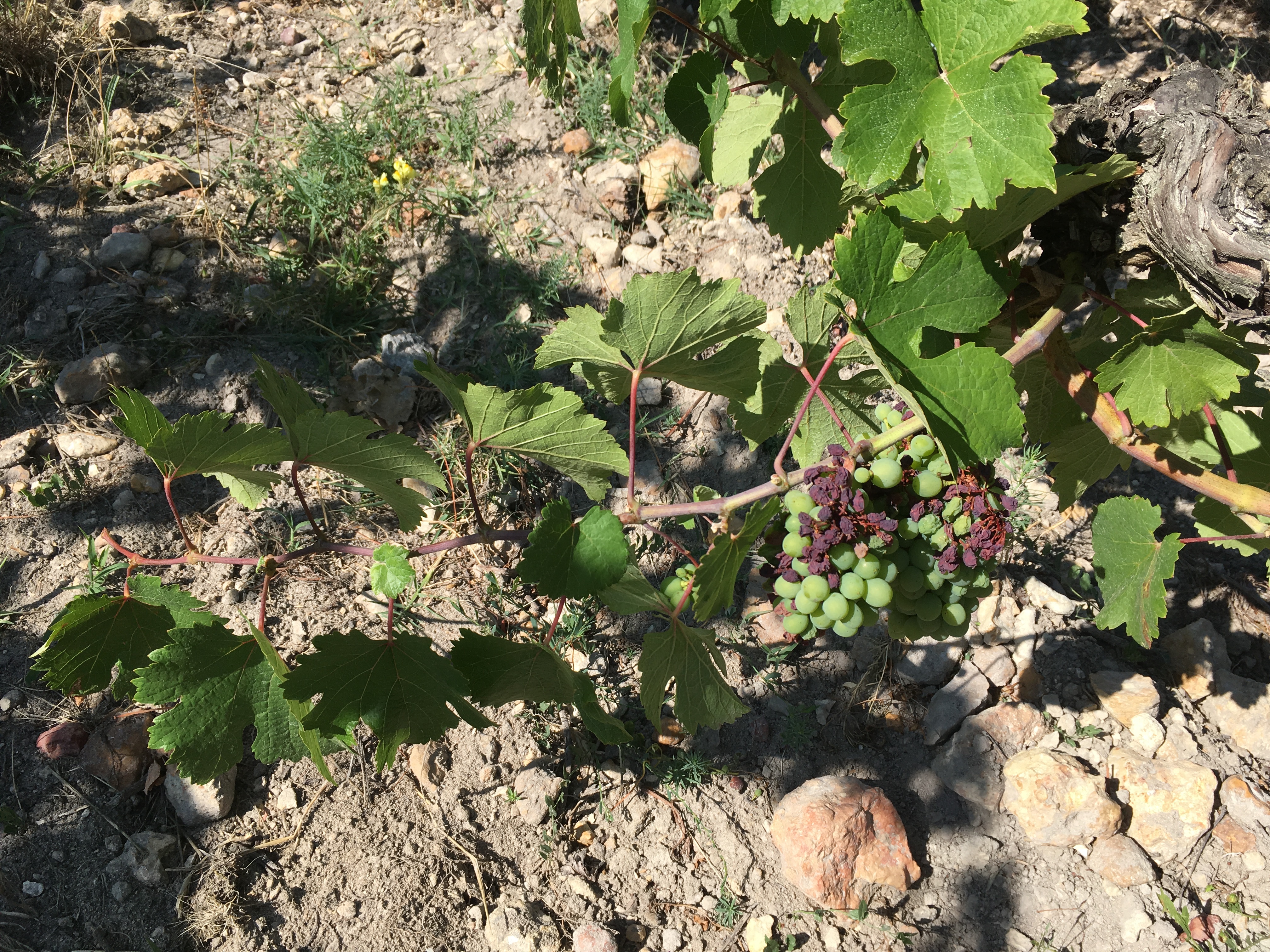 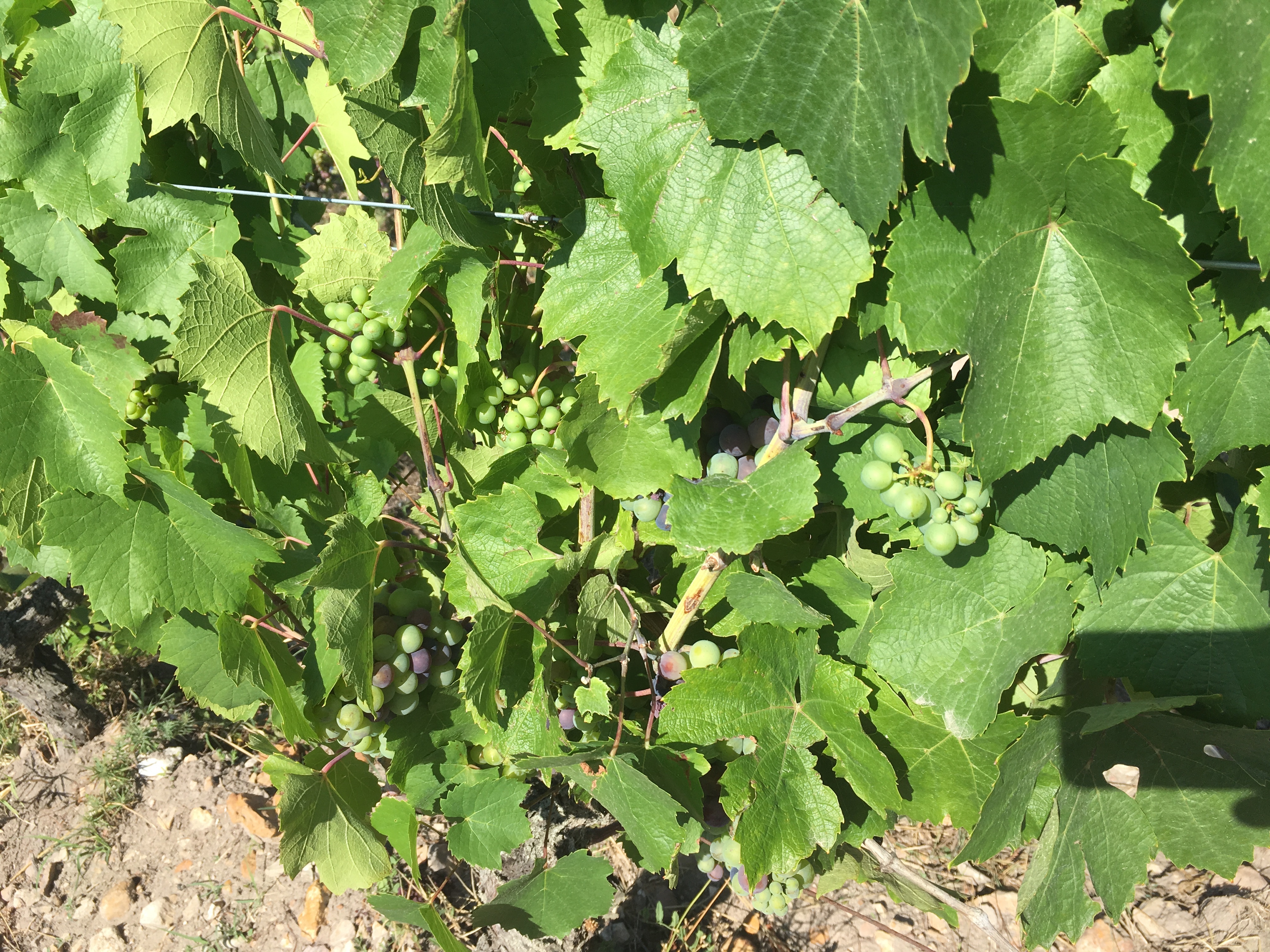 The frost pushed the flowering season a little bit later to the third week of June, however it was during a cool period with lots of humidity.  Thus there is a bit of millerandage (bunches of small and large grapes) in the grape bunches.

While there was no pressure of mildew this year, it was at the end of June during the first heatwave when the grapes started to come out.  Marie wisely hadn’t de-leafed so the vines were mostly well-protected, that is until the second heatwave came through in July.

Despite being away from the Domaine on vacation during Heatwave #2, there was nothing that could be done.  The temperatures and sun exposure on both the East-facing, and even more on the West-facing clusters toasted the Chenin into burnt clusters of raisins.  Counting frost & heatwaves, the loss for Chenin is about 10-15% in some parcels, the loss for the Gamay and Grolleau is 30-50%. 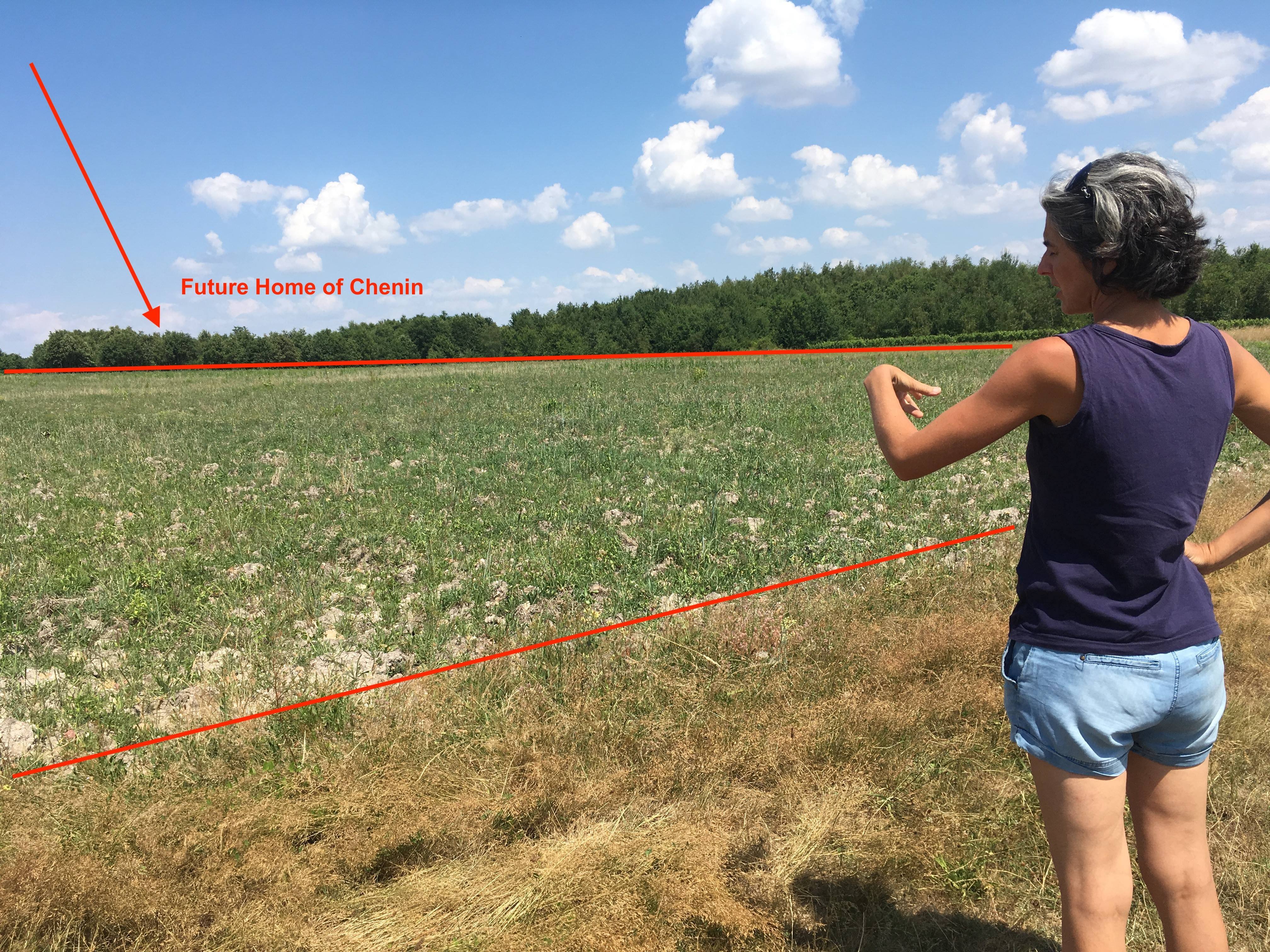 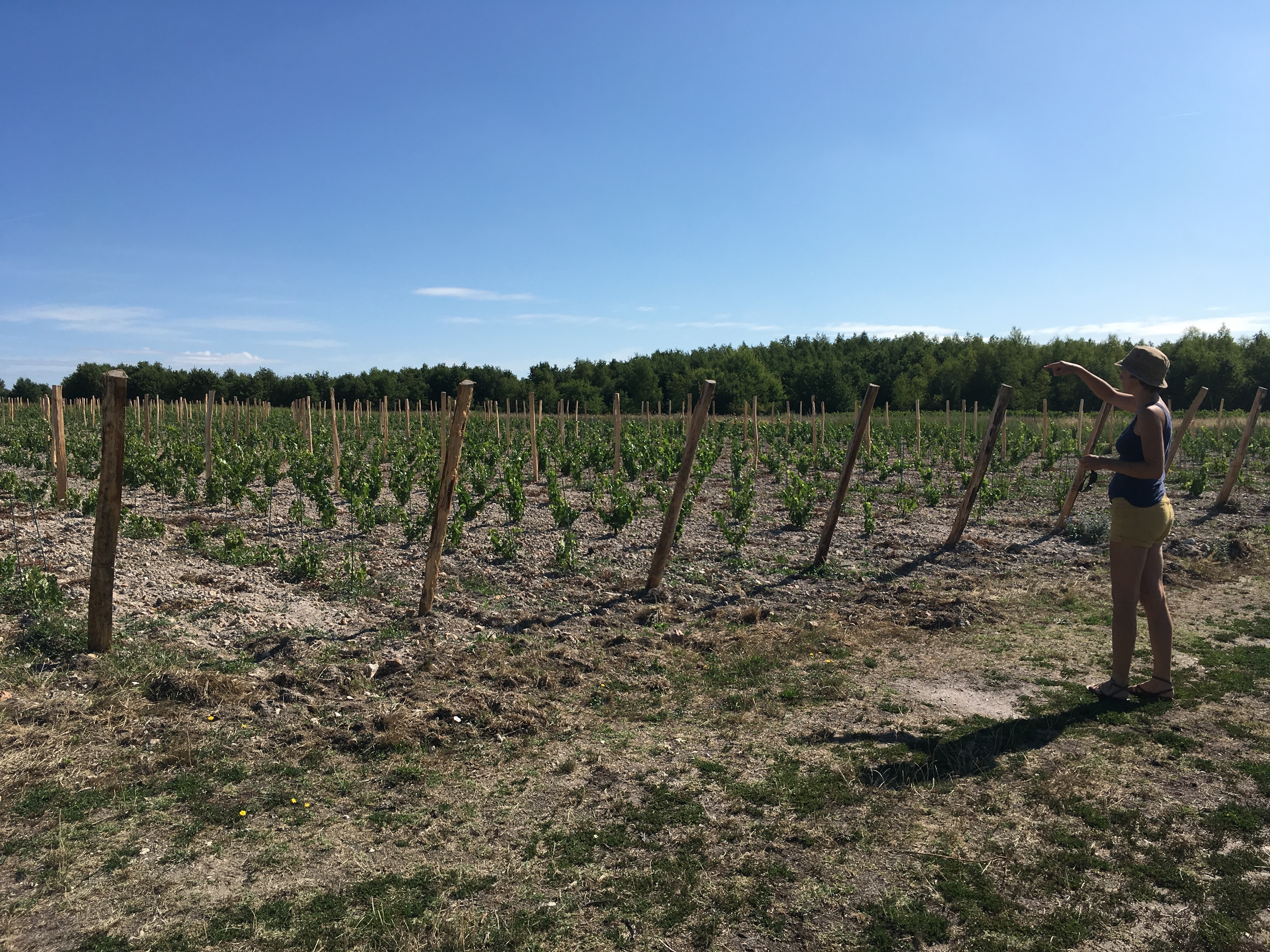 When touring Marie’s vines last year, she showed us her future plot for Chenin.  What was just a field of covercrop cereals to rejuvenate the soils last year, has now materialised into a parcel of 0,5 HA of Chenin.

Planted in May, the heatwave made things challenging for the newly-planted vines as they required a lot of extra watering (1.5L each plant).  To ensure the vines were well-hydrated, it took two people 10 hours to water the new plantation of .5 HA  – this was done 4 TIMES.

The parcel is a bit of an experiement with a unique twist divided into three parts:

Two thirds of the vines are planted on two different types of rootstocks to test which is the better match for her Massale Selected Chenin.

The third second of vines have been on their own roots – not grafting on American rootstock.  The soil of this particular 0,5HA plot is quite sandy, so while Marie is aware of the threat of phylloxera, she was willing to take the risk.  And it seems to be working – the 1/3 of Chenin planted on their own roots are the healthiest of all the baby vines and are sending out big, leafy shoots! 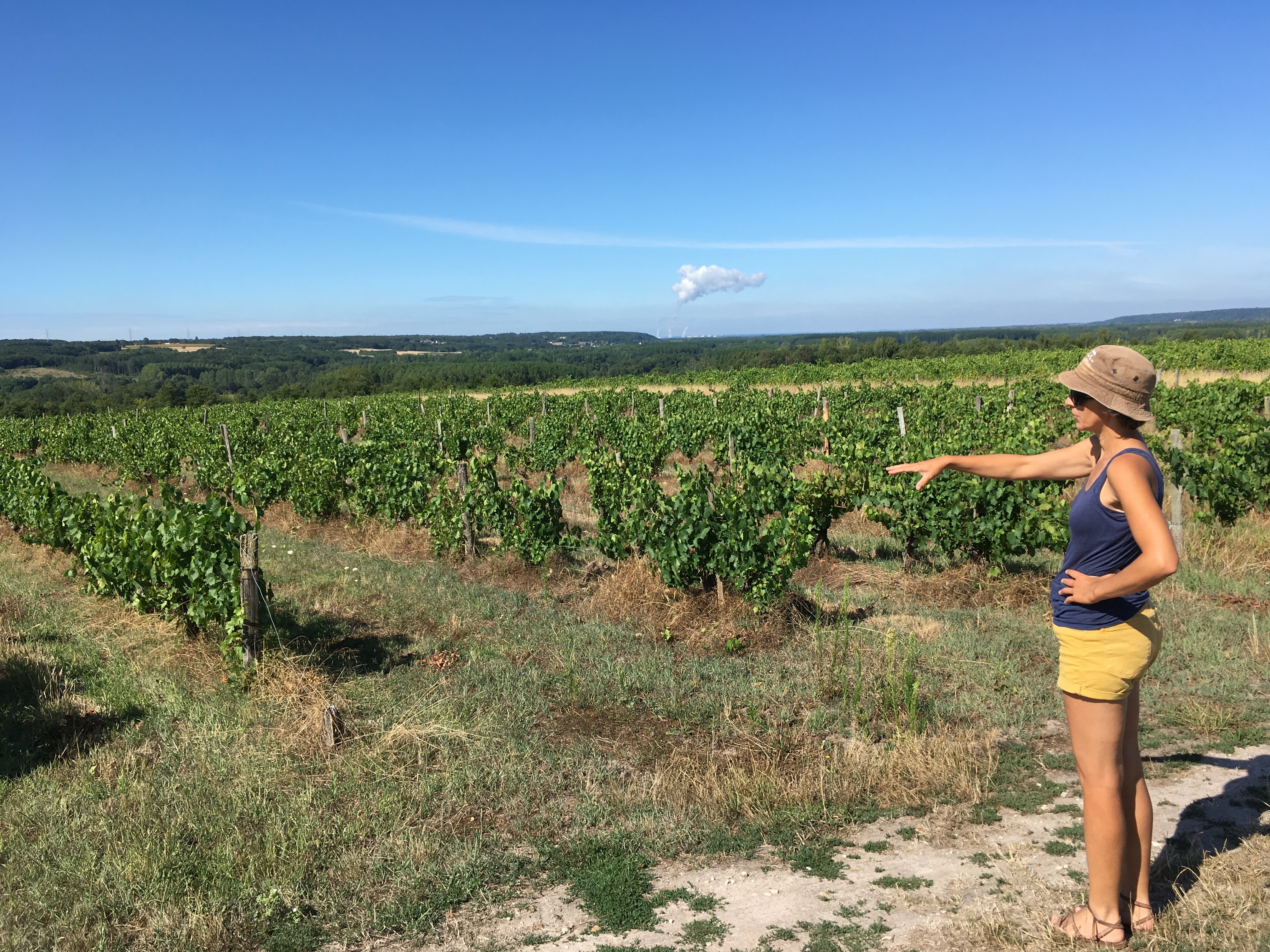 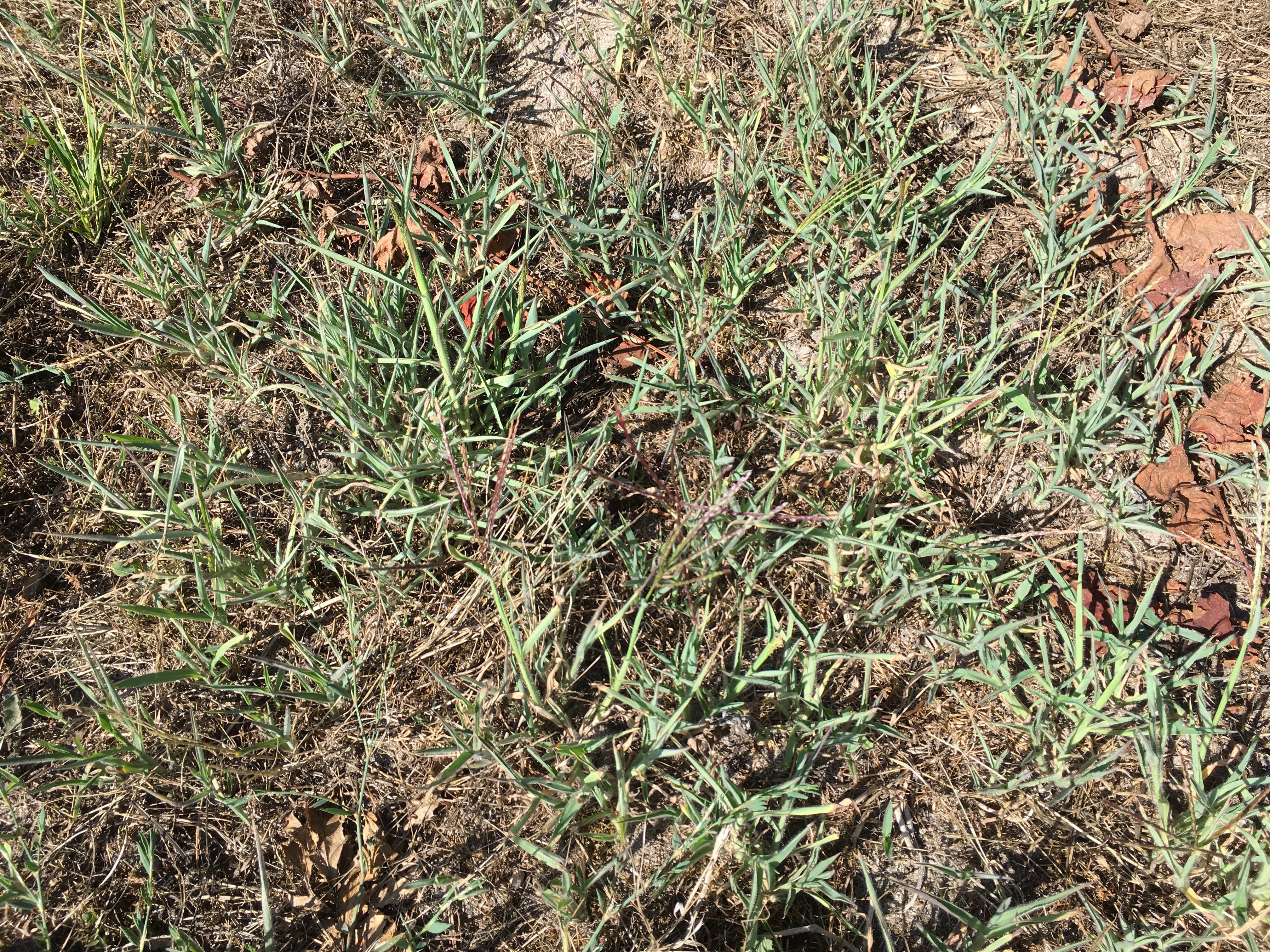 Photo 1 : Marie evaluating the big task she has for Winter 2020
Photo 2 : Crabgrass has spread everywhere between the vines
Winter 2020 Project : Conversion 1,5HA of Conventional Gamay

Marie’s had her eyes set on her neighbour’s gamay for a while now, and she has finally signed a contract to manage the vines and buy the fruit.  The challenge is that these vines have been farmed conventionally, with herbicides, etc.

While she is thrilled to have the vines, the actual task is daunting.  Due to the application of herbicides, only the strongest weeds have survived, meaning that invasive crabgrass has spread throughout the soils, aggressively thriving on the water resources that the vines desperately need.

This is a big project for Marie starting in January 2020 – volunteers are welcome! 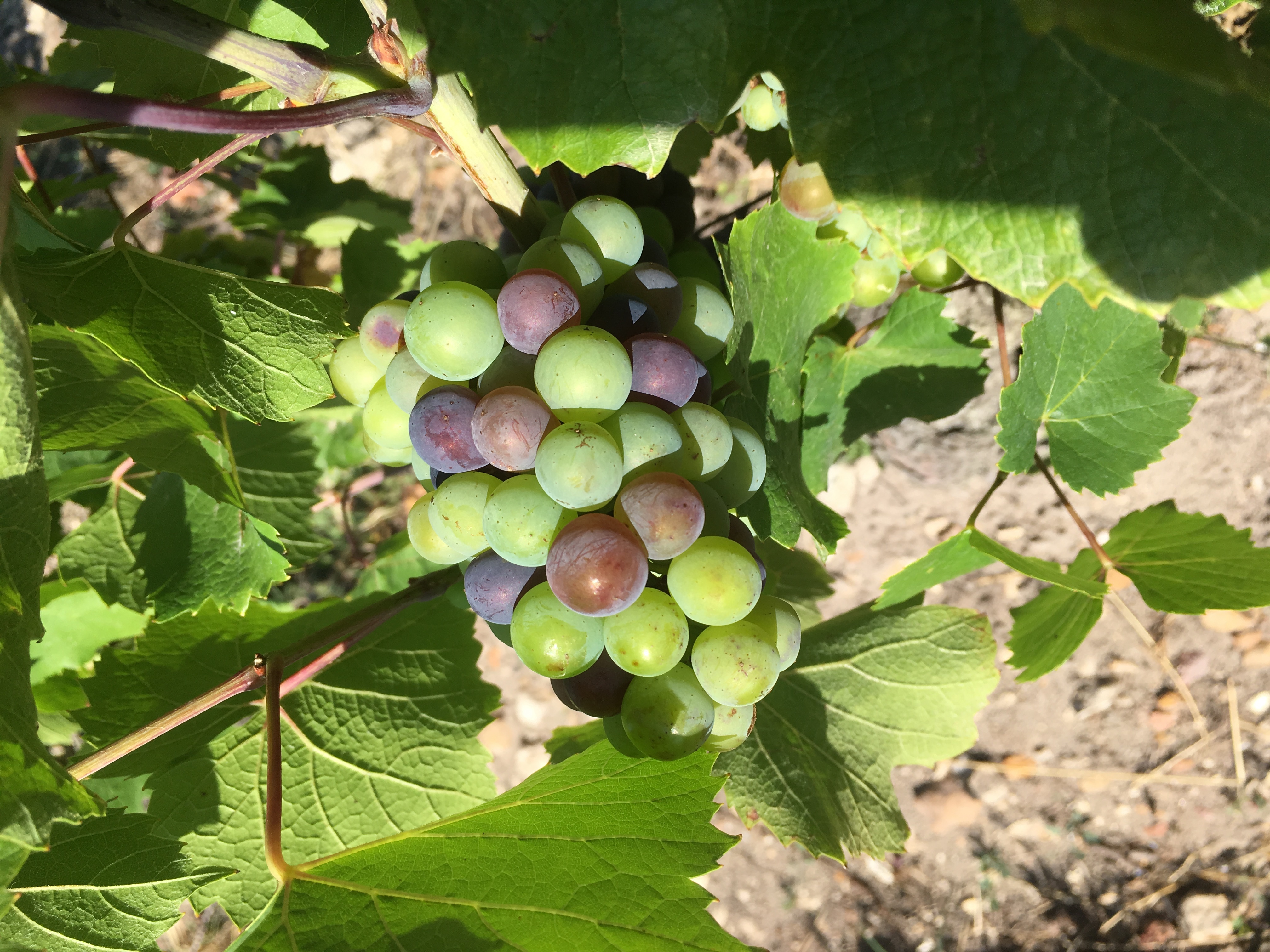 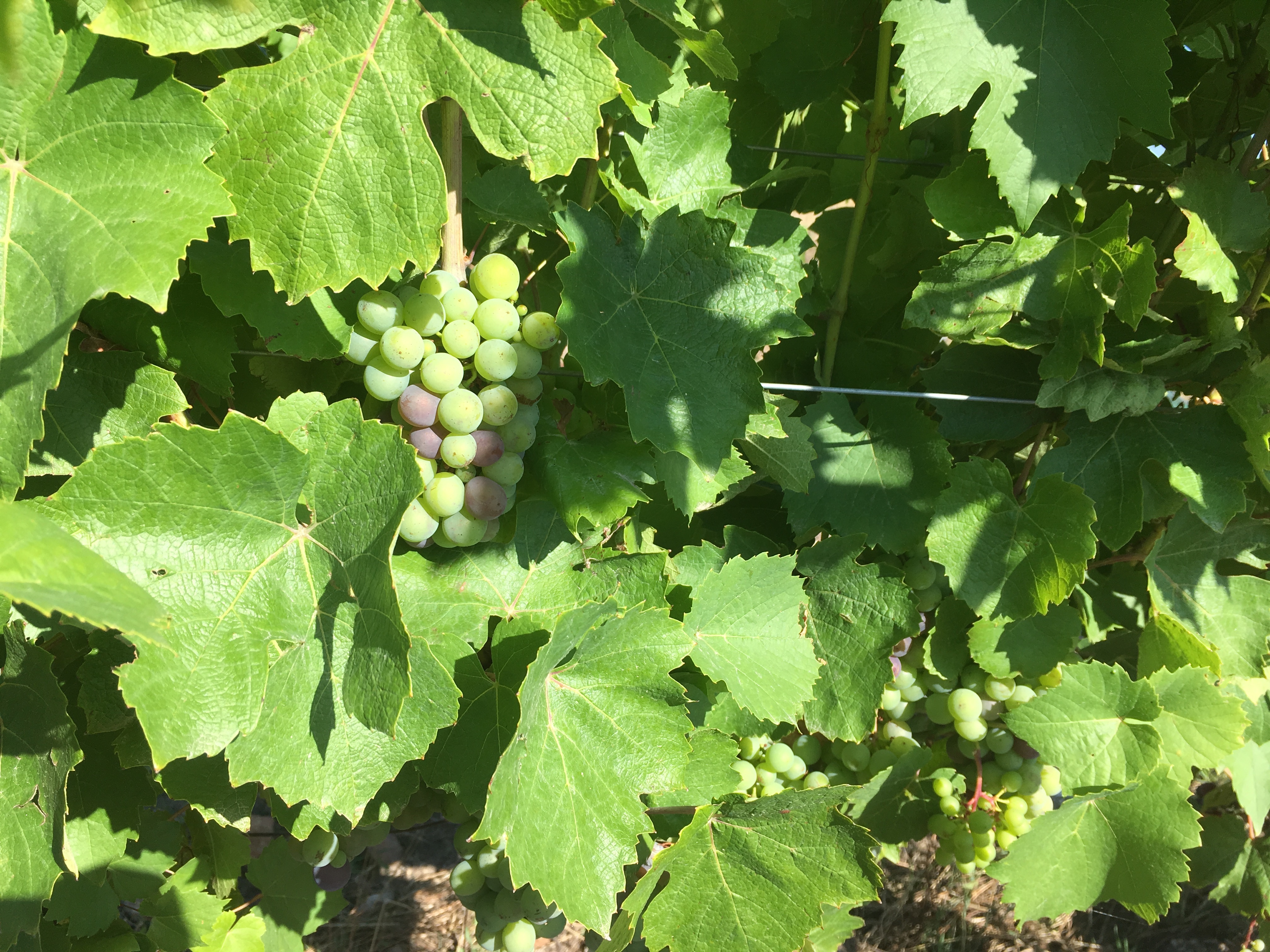 After harvest, Marie seeds her rows with various oats, sarrasin, flaxseed and other cereals to regenerate the soils, develop good root channels for water penetration, and encourage earthworms.

From the months of December to January, a mobile enclosure is installed around Marie’s vines, and a shepherd installs 40 sheep that are left in the vines with a dog-keeper to eat the crop covers, weeds, and herbs that come out after vintage.

The benefit is two-fold.  The sheep fertilise the soils, and they eat the grasses, which will sprout even more vigorously after they have been grazed.

When the sheep leave, the crop covers continue to grow until about March.  This is when Marie has to be careful to monitor the humidity and frost warnings as the crop covers and extra grasses can trap moisture which could be detrimental to the vines during a frost spell. 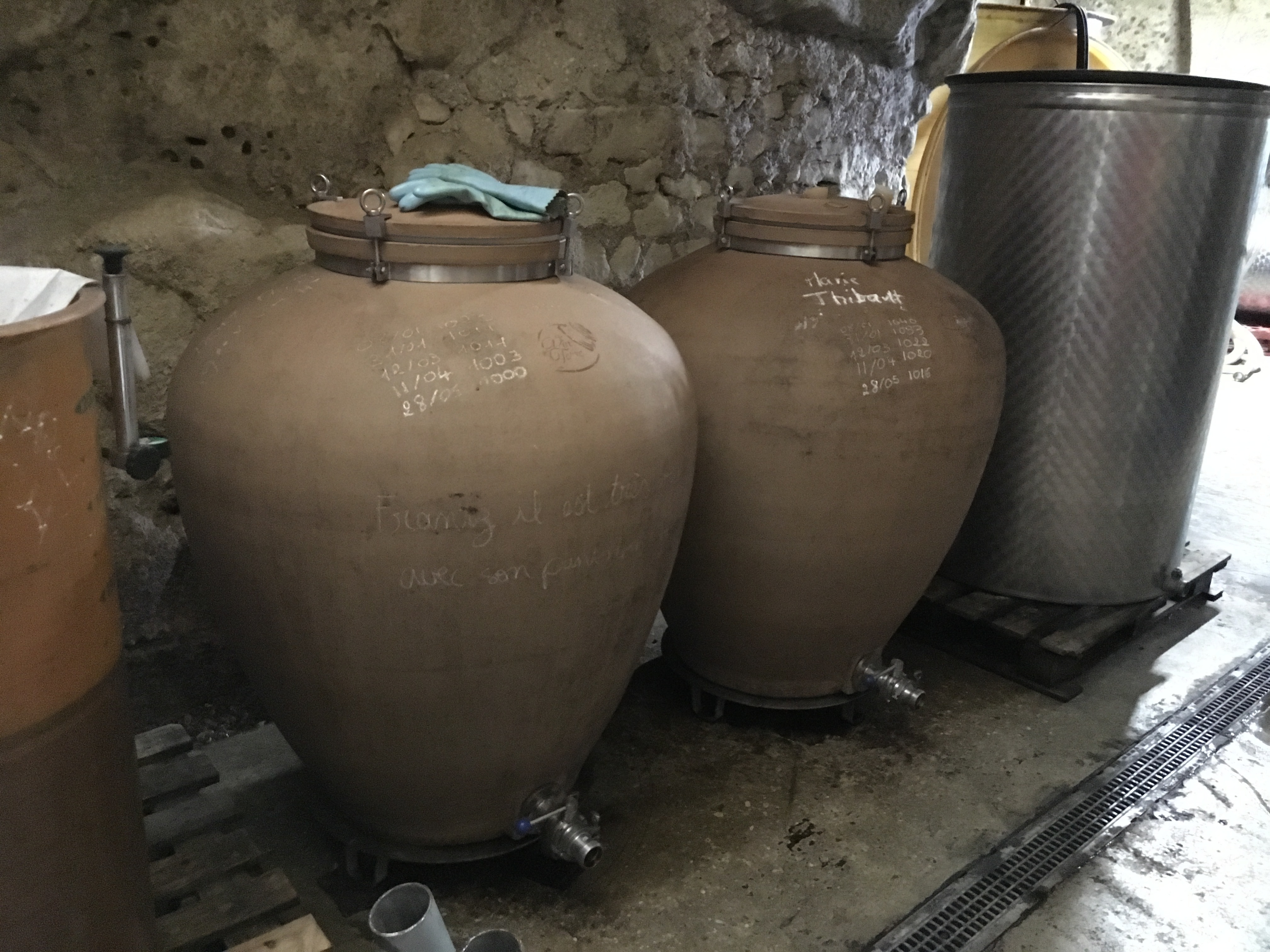 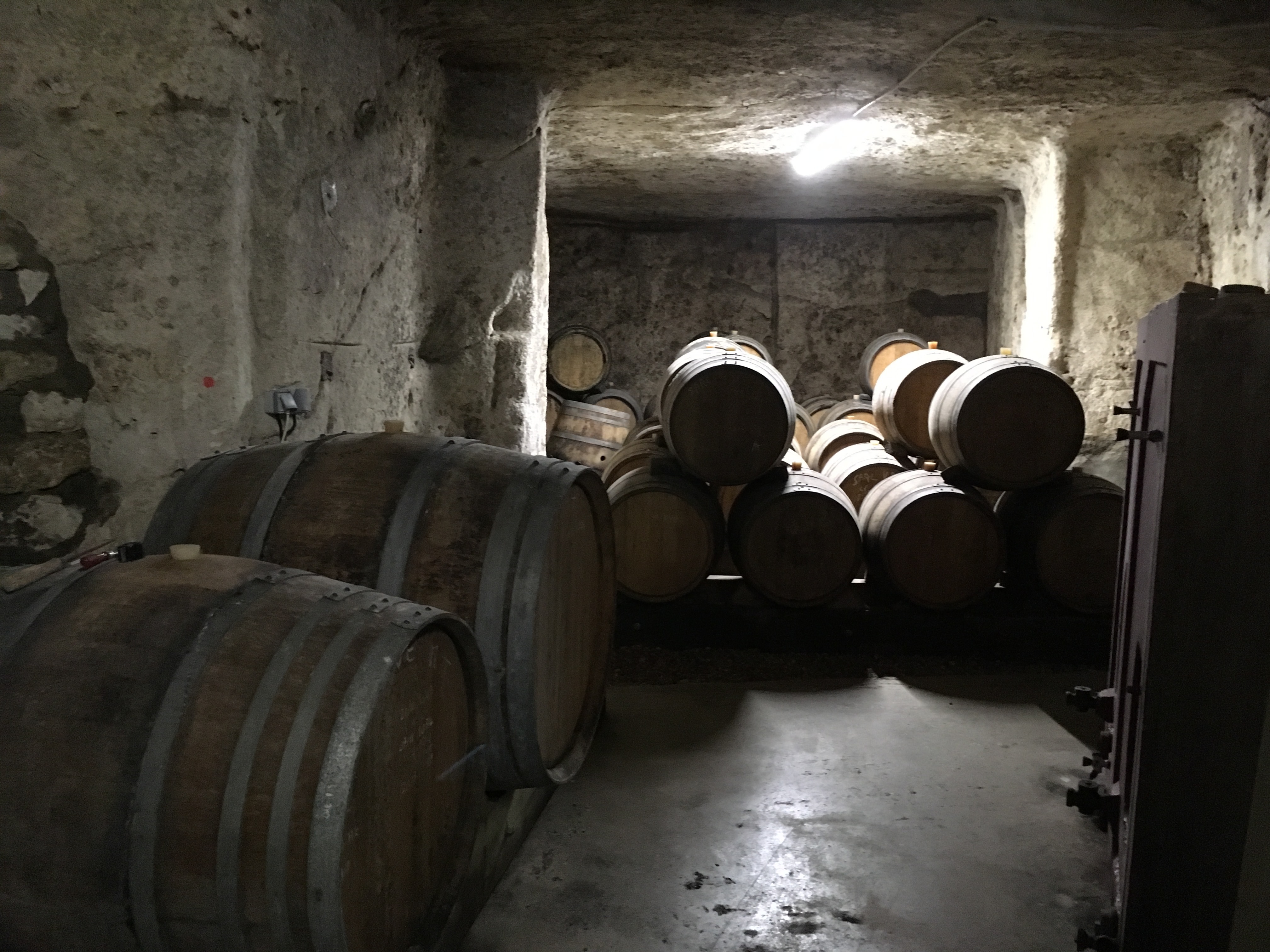 Why such a slow fermentation?  Marie thinks that it is due to the heatwaves. The ambient yeast that is normally in abundance in the cellars and among the vines is not present as usual, burnt off from the sun.

Les Grands Vignes 2018
This 100% Gamay is has just finished it’s 9 month maceration under skin cap.  It has been racked, without pressing, into a concrete tank, until Marie expects to bottle it in Winter 2020. 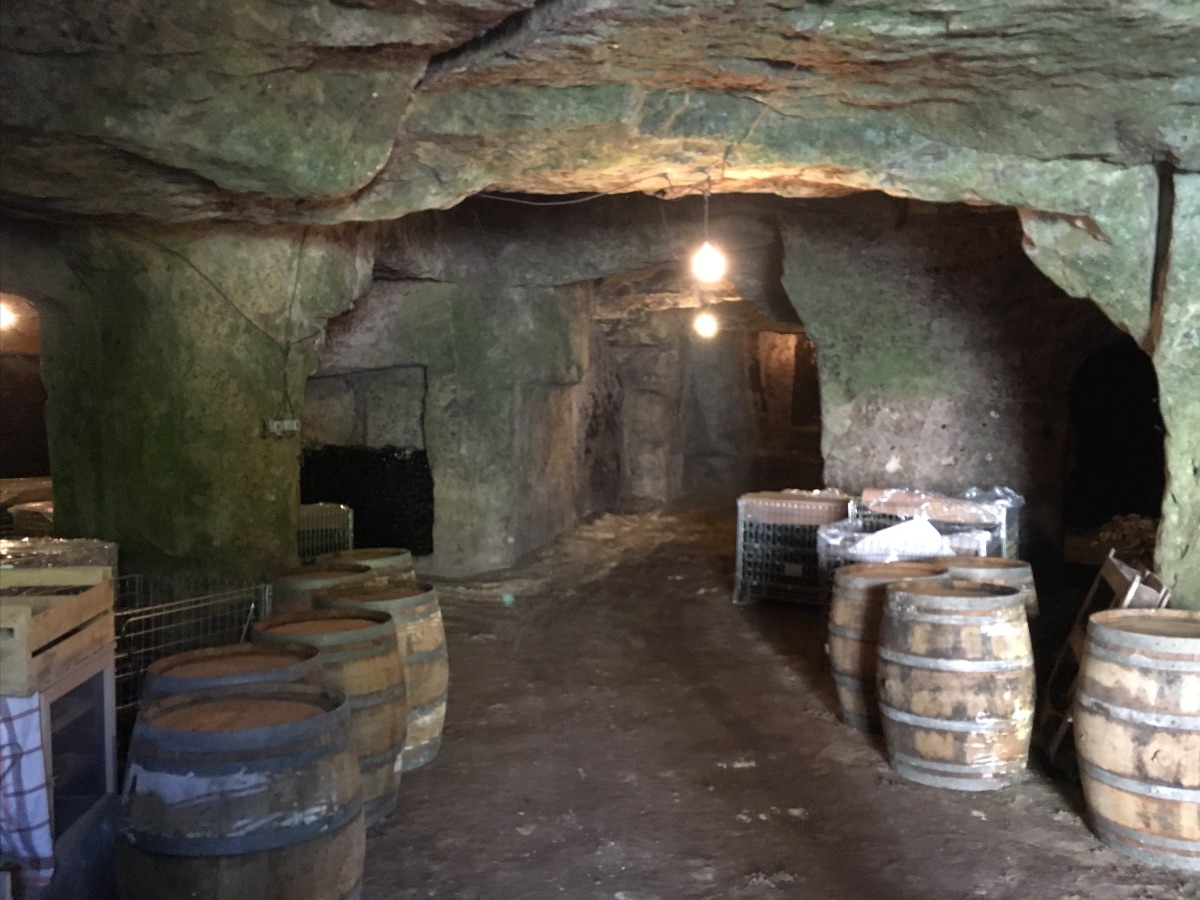 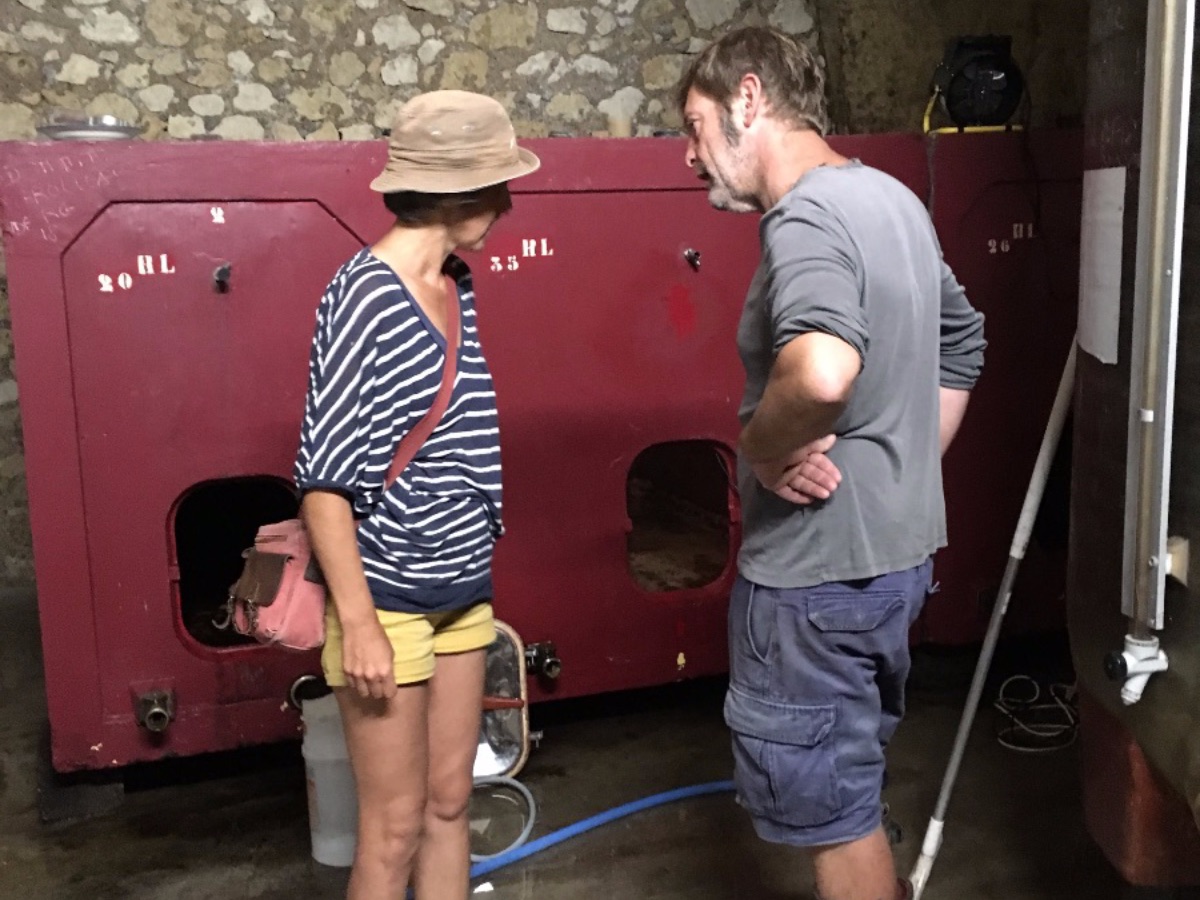 Photo 1 : Despite 35°C outside, the cave is a nice 18°C all year round
Photo 2 : Teamwork! Marie and Frantz discussing the racking of Les Grands Vignes 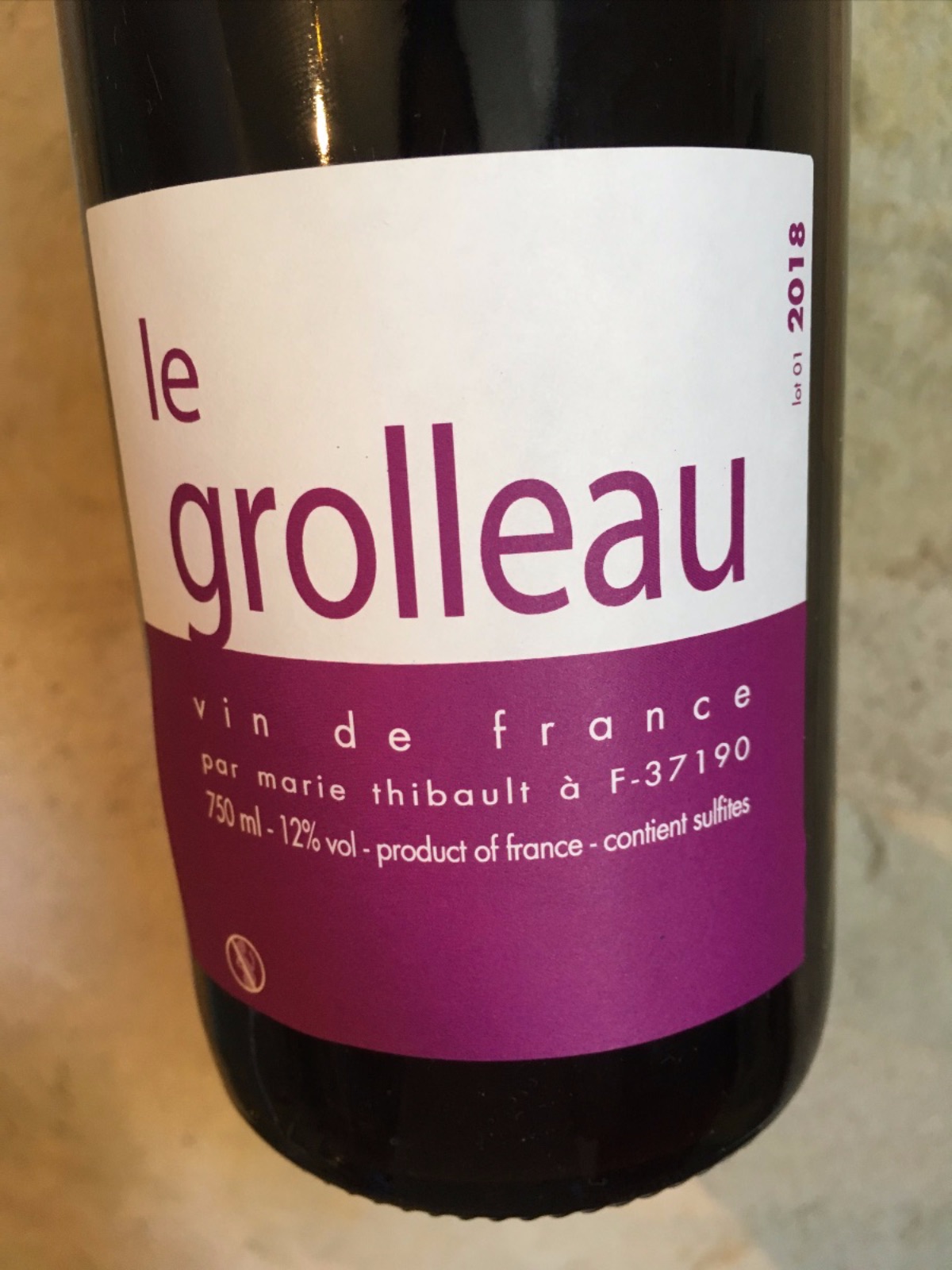 Grolleau 2018
A native variety to the Loire region, Marie has truly come to master this grape.
The wine is made of 100% grolleau grapes that have been de-stemmed.  After a short 10-day ferment, it is moved to concrete tanks to ferment and age for 6 months.  This wine has no additives or sulphites added at any step of the winemaking process.  Bottled March 22.

Tasting: The nose is perfumed with a mix of Christmas cake spices – cinnamon, clove, nutmeg.  The palate is full of smoky black plums, blackberries, black currants, garlic, sausages.  Despite the 13,5% alc, the wine is very well-balanced on the palate.  Pairs well with roasted and grilled meats. 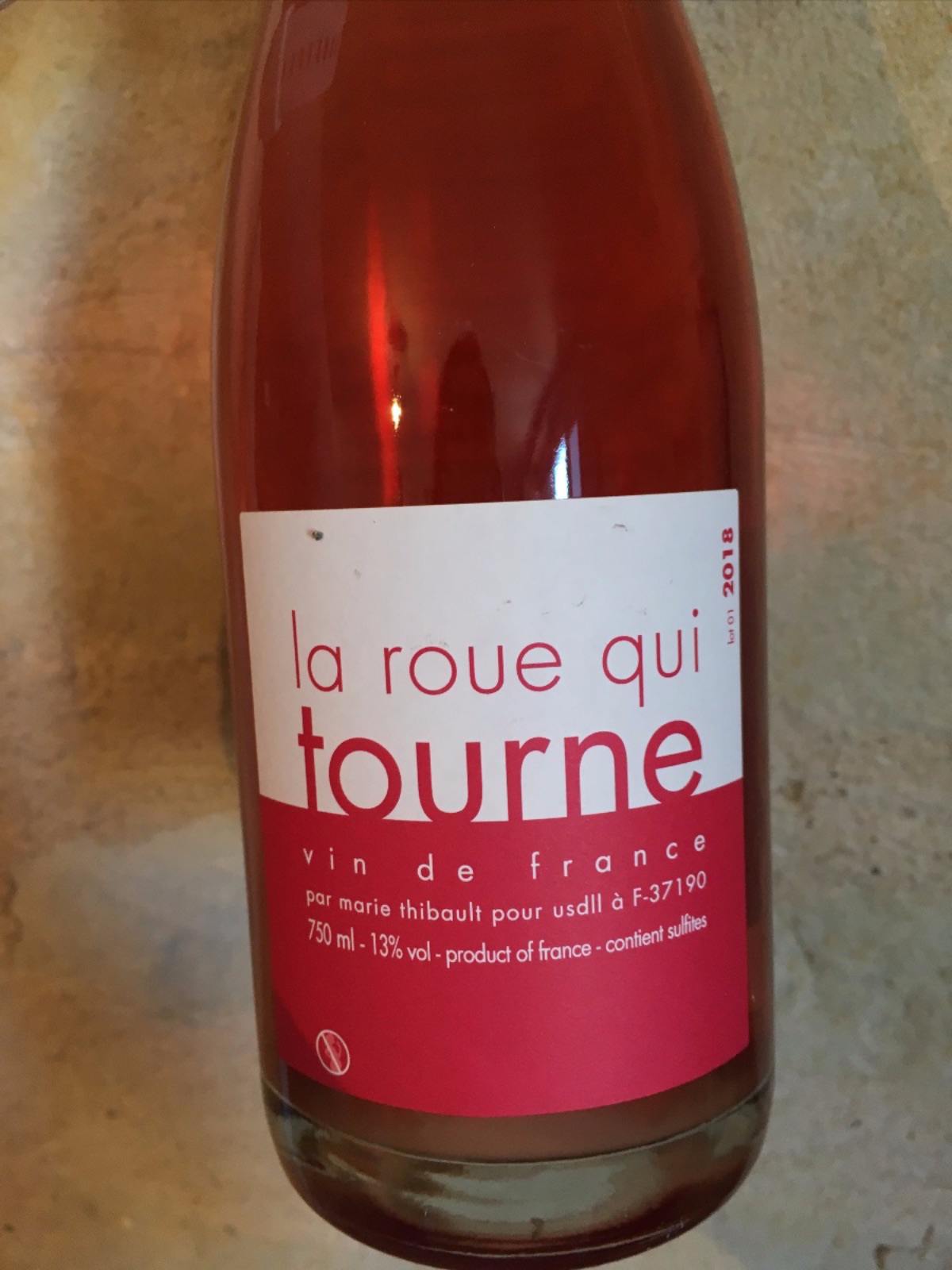 This pet nat is a base of 100% gamay grapes and is a rather serious sparkling at 4 bars of pressure, with a fine and precise mousse, and a dry, raspberry-like acidity.  Tarte red currant, quince, pomegranate and underripe strawberries make this a refreshing wine on the pallet. 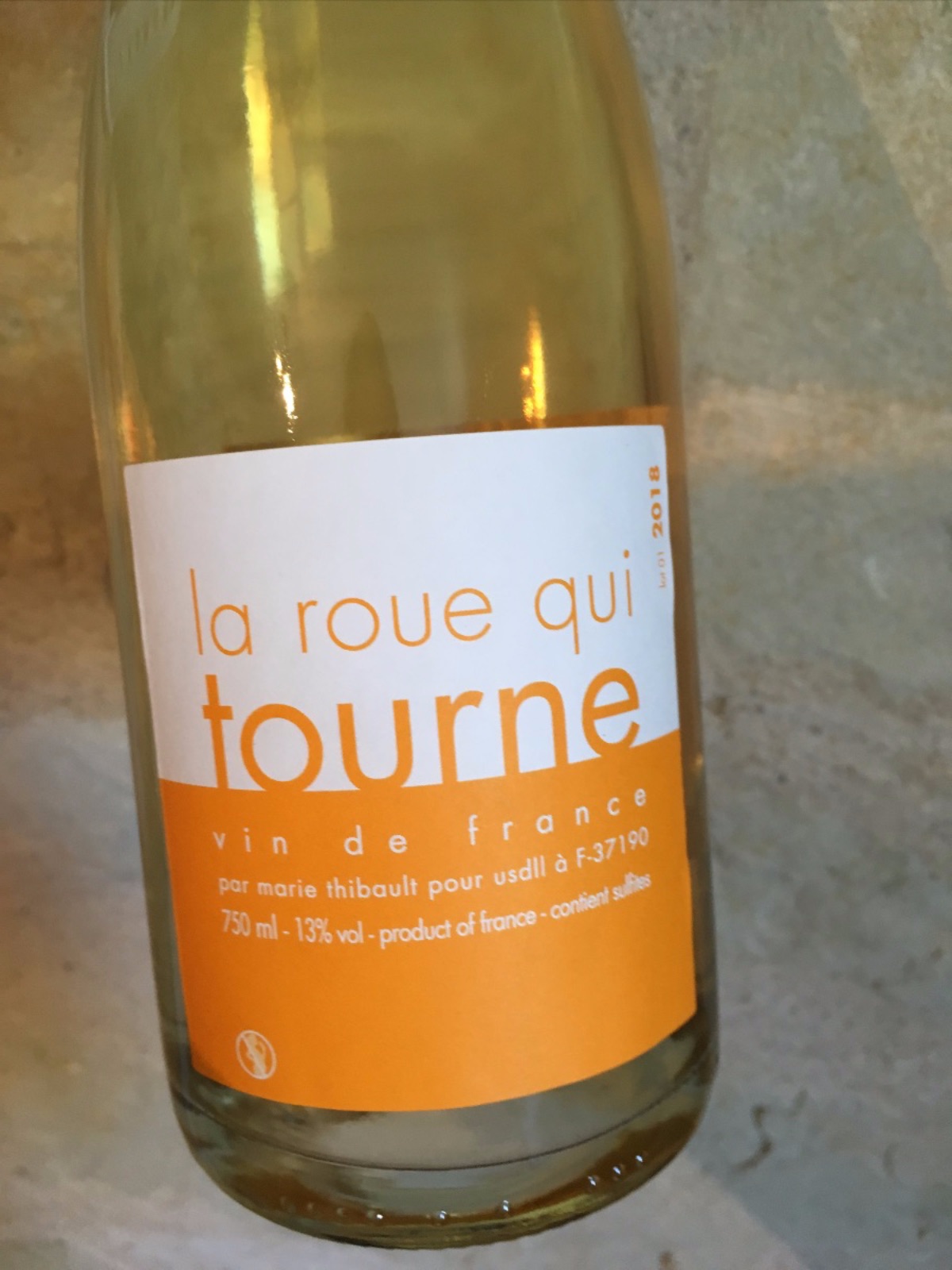 Released in June 2019, this wine has still a few grams of residual sugar that nicely balance the wine’s acidity and fine mousse.  The hallmark baked yellow apple and wet-wolly notes of Chenin are well presented in the nose, but juicy white and yellow peaches, just ripe-pineapple and Asian pear fruits are lusciously ripe on the palate.

Return to the Vineyard: 2020 Muscadet Harvest at Domaine Batard Langelier