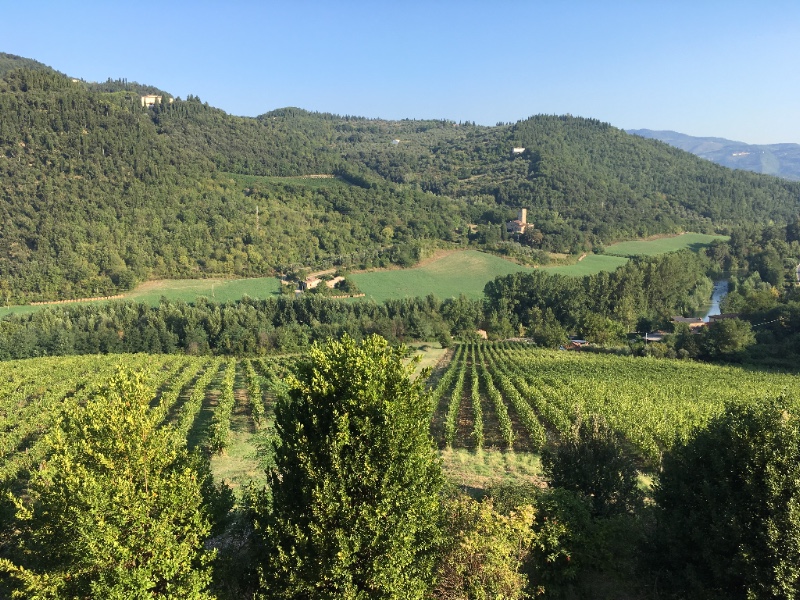 Arriving in Pontassieve, the shift in temperature from 37°C Florence is an immediate relief.  At the foot of the Apennines, we are at 350m elevation, at least a good 5 to 7°C cooler, and I am immediately refreshed.  You have the sense that you are not in Tuscany anymore, but a secret place that operates happily inside their own bubble, yet we are just a mere 30 minute commute from the big city.

Yumi – Selvapiana’s resident Maremma Sheepdog, greets me at the entrance.  Over a bowl of locally-made gelato, Silvia Giuntini talks about the history of the dog breed in the region, and her father Francesco Giuntini’s contribution to the local heritage breed.  Having been a breeder of the Maremma Sheepdog for over 30 years, he is partly responsible for bringing it back from near disappearance.

Local is a word that is very important at the Selvapiana estate, and these beautiful white sheepdogs are just another example of it.  It was Francesco that made the decision in 1973 to do only massal plantings from his Bucerchiale plot, promoting the indigenous Sangiovese when many others were adopting the fashionable French varieties of the time.  Federico continues to live by that same philosophy, by supporting Rufina as the President of the Consorzio of Chianti Rufina.  He is passionate about Rufina, and sharing this region with the world.

The Importance of Rufina

When visiting Selvapiana, dinner is always at the neighbourhood Trattoria, Toscane da Sempre in Pontassieve.  As big promoter of the Slow Food movement, owner Stefano grows his own wheat and maize for their pasta, and uses local ingredients as much as possible.

Federico has been a very busy man this year.  He celebrated his milestone 50th birthday in May, and has  begun to introduce the 6th generation into the family operation.  He has started to work more closely with his son, Nicolo, who has just finished viticultural school.  Nicolo will be travelling to Oregon this year to do vintage abroad, and then to Australia in the winter for a vintage down under, before returning to Selvapiana on a more full time basis.

As president of the Consorzio del Chianti Rufina, Federico has been working hard to promote the Rufina region.  As a region with only 1000HA, and twenty producers (Frescobaldi owning 1/3 of the acerage), this small region works hard to assert its independence from its historic association with Chianti.  Federico represented Selvapiana in London, UK this past June during Decanter’s prestigious tasting event with the Consorzio, and hosted a tasting in New York City this past Spring of Selvapiana vintages dating back to 1958!  The Italian spirit of generosity in wake of the birthday celebrations continued! 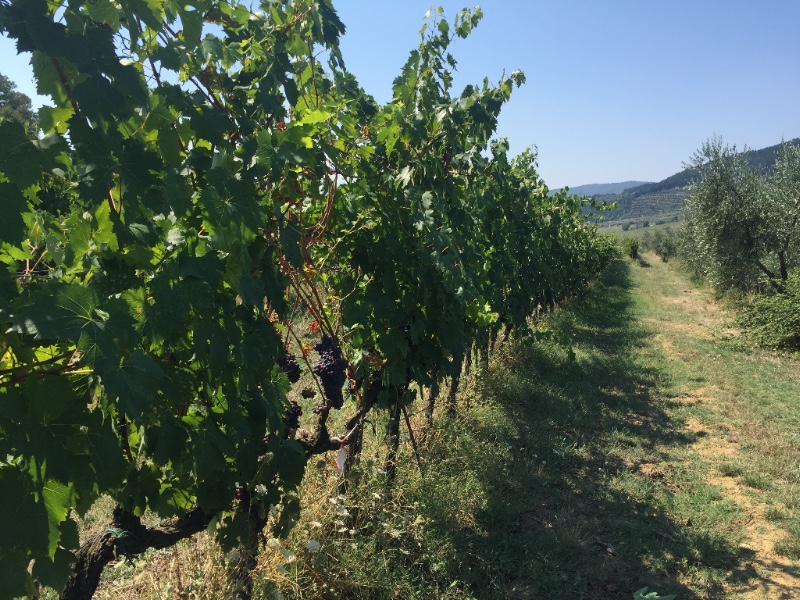 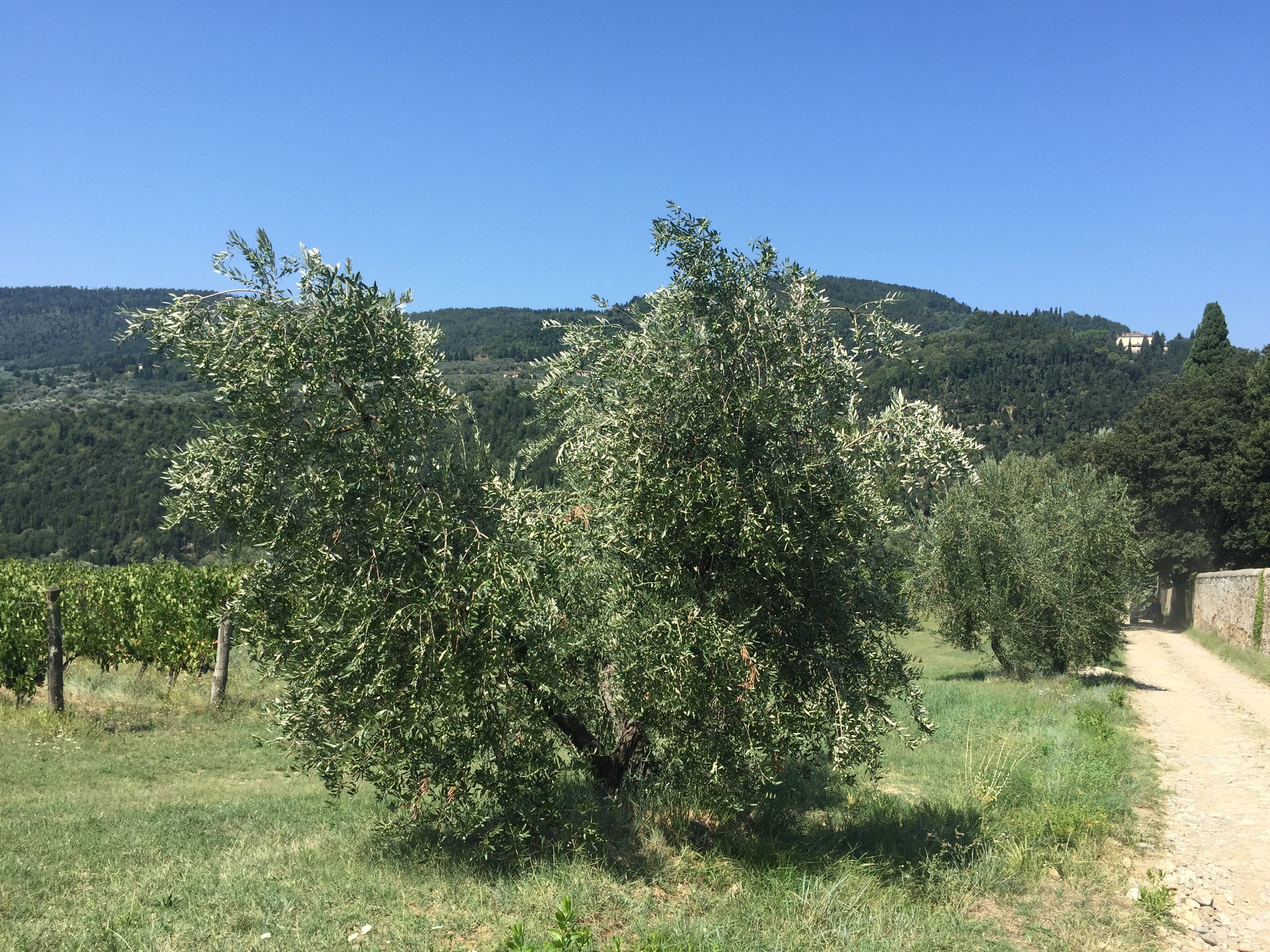 Vintage 2018: A rainy June makes for lots of Green!

During our walk in the vines, I am also surrounded by something that wasn’t there last year – the colour GREEN!  Everywhere!  In contrast to last year’s dusty dry conditions that reduced Selvapiana’s grape harvest by 30-40%, and left almost no olives to harvest for their famous olive oil, this year the harvest is in abundance, and the olive trees are looking so good that Federico already expects 2019 to be equally productive.

Within the 60HA of Estate vines, there is a lot of foliage thanks to the rainy June.  Green-harvesting, a practice that was used frequently during the rainy early 90’s, might be revisited again depending on next week’s Chardonnay brix measurements.  The 20HA of olives on the other hand have greatly benefitted from all the water! 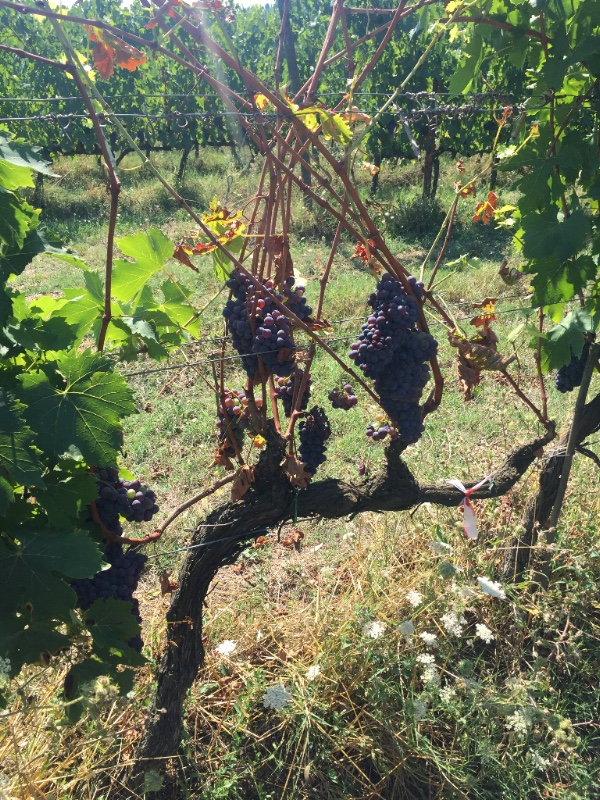 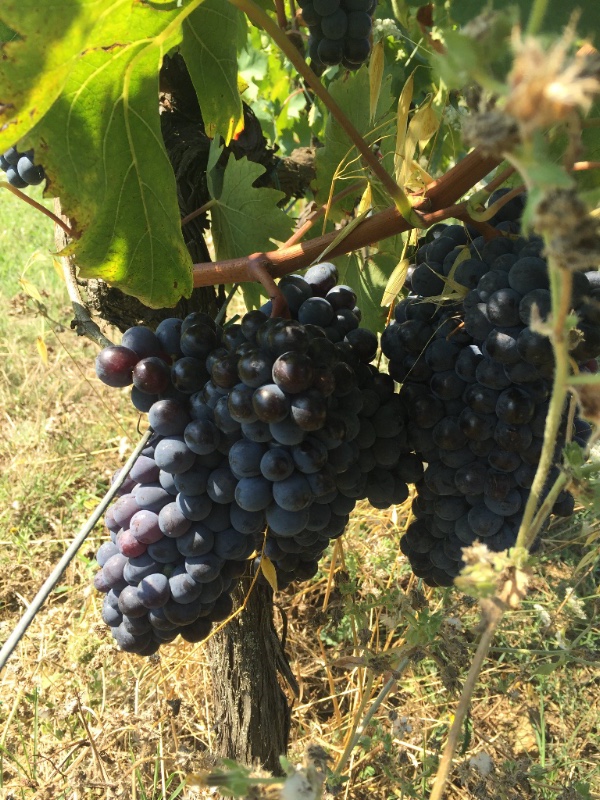 Beginning of veraison on July 25

The region has been much cooler and more wet than last year, receiving nearly 900mm of rain in contrast to the 300mm down in the Southern part of Tuscany.  This has brought about ESCA in abundance.

The trunk-disease is a cluster of different fungus (mushrooms) that have bloomed inside the trunk with the additional water, and it is more evident this year in the vines than years before.  When the fungi appear, they physically block the water flow from the roots to the branches, thus dead branches start to appear, and the vine literally drys out.

The neighbouring vignerons have adopted a method of inoculating competing fungus in an effort to stave the spread of ESCA in the parcels.  This method has worked in other fruit trees, but is yet to be known if it will work for grape vines.  Another “farmer’s method” had been to make a hole at the site of the ESCA in the trunk, and insert a stone to keep it open to “dry out” the fungus.  ESCA currently accounts for 5% of annual vine death in the property.   To be continued…

Despite the coolness, the shift in seasonal ripeness is also evident – earlier and earlier.  While veraison for 2018 started July 25th, Federico recounts stories of older vineyard workers who remember veraison starting in the region as late as August 10th. 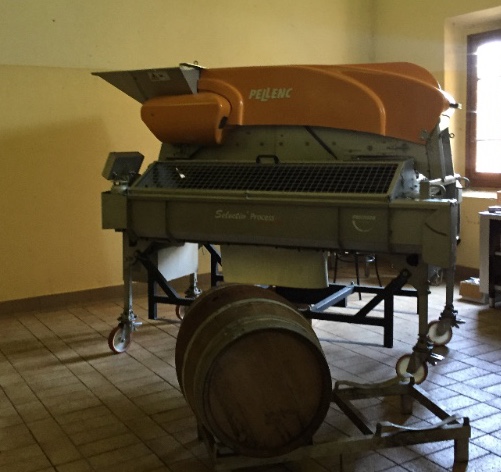 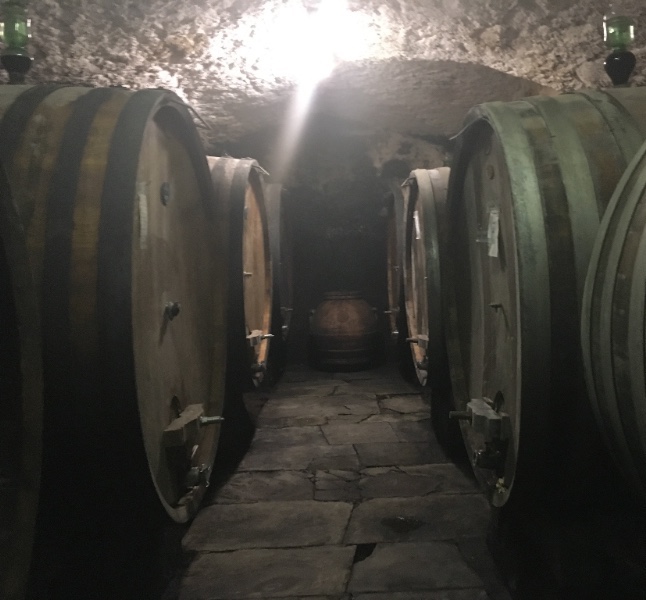 The cellar is ready for the bountiful 2018 vintage, and the new grape sorter / de-stemmer will be used again after making its debut last year.  This is a new generation one and thusvery effective in sorting out the grapes.

Thanks to a large stock of back vintages, Federico is always generous and happy to share older bottles with visitors.  Our guests were pleasantly surprised to find their birth year wine – 1973 – that was still showing robust and rustic thanks to the consistent storage conditions of the middle-age and renaissance cellars.  Vintages date back to 1948, as the estate was occupied during WW2.  Unfortunately no wine was hidden in the walls, as Federico explained instead the families put importance on hiding the cheeses and salami from the occupying armies!

This cellar was also used to store olive oil in amphora, which is still in the cellar today as a witness to the past – https://www.youtube.com/watch?v=iswdX-BAiRY… which begs the question: “Will there be an amphora-aged wine in the future?”  Federico shrugs, and says “that is for the 6th generation to decide!”

Aside from the 1973, we also brought the 1980 to lunch.  It is still such an excellent example of the quality of winemaking, but also well-preserved as that particular vintage never went through malo-lactic fermentation.  Federico shares that this year he will be attempting the same style of winemaking as the 1980 by preventing malo from happening.  He also shares that he will be starting a few pressings of whole cluster Sangiovese! 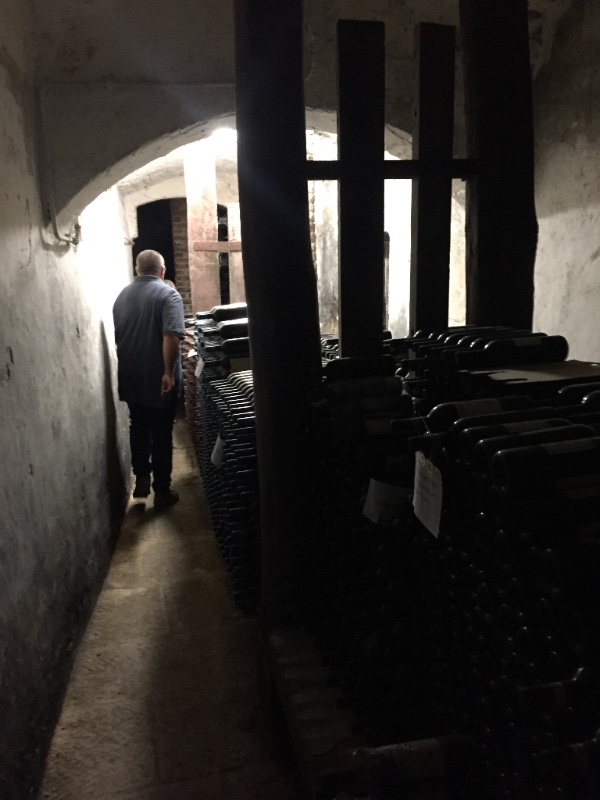 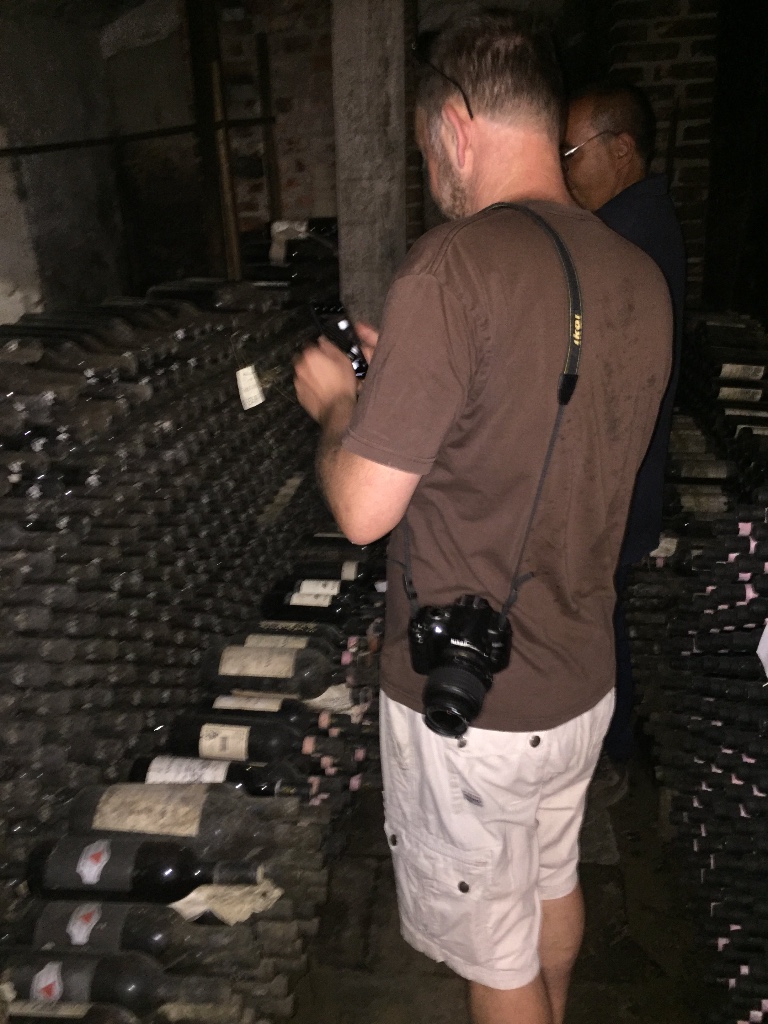 Photo 1: Journey into the cellar with Federico
Photo 2: Finding birth year vintages.  YES – back vintages are for sale!

Tasting Notes of Wines Currently & Soon to be Available

Return to the Vineyard: Vineyard Tour with Marie Thibault, Azay-le-Rideau, 2020